The “I Dance Like Elaine Who?” Edition OTB Caption ContestTM is now over. Second: Kenny – “But under my domestic policy there’ll be dogs for everyone!”

Third: John425 – Auditions for the regrouping of “The Village People” continue apace. Here, two contestants have trouble spelling out the “YMCA Song” gestures.

DaveD – And, basically, it all continued to degeneres from there.

Dantheman – A new way for voters to decide on Presidential candidates — who would you rather dance with?

markm – Obama: “oh YES, my kids will love to walk this imaginary adopted dog. Are you sure it’s ok that I take it??” Ellen: “what kind of problems could it possibly cause???”

Come let’s mix where Rockefellers walk with sticks
or “umberellas” in their mitts,
Puttin’ on the ritz.
… &#9835

America contemplates having ‘Happy Feet’ for president, versus the wife of ‘Happy Pants.’

Thursday Contest would like to be a Pepper too. 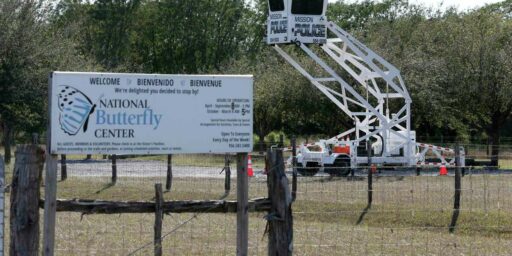