Second: bystander – Sesame Street unveils their new delivery system. It is reported that it is now able to reach Mr. Roger’s Neighborhood.

Third: Elmo – A lil sumtin to calm my nerves? Sure …. Thanks. Leave the bottle.

charles austin – “Houston, we have a problem. We appear to have lost one test-tickle.”

Bithead – Do you like my new space ship? Kermit made it. Uh huh! He riveted alllll over it!

Hodink – “Uh, please take me to your Leader.”

“Well then just what did you mean Perez Hilton, when you said I would get to see Uranus?”

Dennis Kucinich prepares to depart for the mother ship.

Monday Contest is already in a hole, and is digging faster… 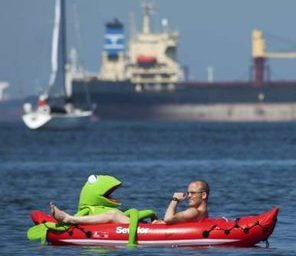