The Mother of Exiles Edition OTB Caption ContestTM is now over. First: Elmo – Obama: If at first you don’t succeed …

Second: Stormy Dragon – Some of the sailors thought the ship’s new figurehead was a little too ostentatious.

Third: DL – Obama wants to move her to Chicago, sir.

odograph – The downside of exporting democracy.

Maggie Mama – No, it’s not a real picture. After the last fiasco, the White House photoshops everything.

BigShyBear – “Class – today’s civic lesson is: Freedom, and the price of Freedom”

G.A.Phillips – Eyewitness:The ship transformed into a giant robot, and did bad things to the statue……

Eric Florack – You know, she isn’t wearing anything under that Toga….

mpw – The great lady salutes those who make it possible.

Uh, Ms. Liberty, what would your husband say about, “Give me your tired, your poor, Your huddled masses yearning to breathe free?”

With Obama’s slide toward socialism, the French reclaim the Statue of Liberty. 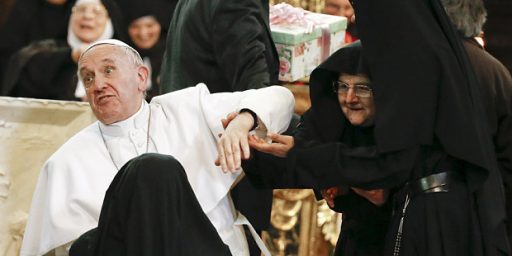