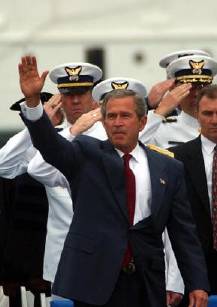 1st, Hermetic: “Throw ya hands in the air! Wave ’em like ya just don’t care!”

2nd, Frank: “The President is eliminated in the first round of Simon Says.” Write your own caption in the comments below.
WaPo (AP)
The winners:

3rd, Steven: “At least I lost to him in the general election.”

Thanks to all the participants!

Score Another One for Steve McIntyre