The most recent OTB Caption ContestTM has closed.

The winners were all on the same track this week: 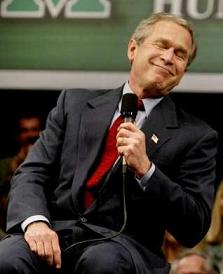 1st, Rob*: Holy moly my Clymer hurts. Somebody fetch me some Preparation H.

2nd, Exek: President Bush drops some of his very own weapons of mass destruction during a recent speech on the economy.

3rd, Ted K: Shortly afterward, Laura informed the White House cooking staff that, regardless of what her husband might claim, beans were FORBIDDEN from the menu.