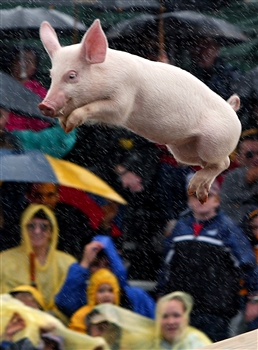 First: Roger – Mr. CarlsonHerb Tarlick: We wanted to give free hams as part of the newest WKRP promotion and we took a bunch of pigs up in the hot air balloon but, God as my witness, I really thought pigs could fly.

Thanks to all the participants, but that’s not all this contest had a large number of funny captions, so I have to recognize a few more.

Lasting Magic – Ã¢€œToday in the news, Babe is putting a face on a constitutional amendment to allow natural born and foreign-born pigs to become president.Ã¢€
keith taylor – You know why the spectators are carrying umbrellas? Once farm animals learned to fly, rain was the least of our worries.
Kate – James Carville on Meet The Press Nov.18, 2008

In the end only John Madden got the call right that the play was not reviewable.

Another Contest will be coming soon.

UPDATE: McGehee gets an assist on the name change for First Place. and Denise offers this clarification (with one minor edit):
Les was reporting from the scene: Ã¢€œOh, the humanity! The pigsturkeys are hitting the ground like sacks of wet cement! Not since the Hindenberg tragedy has there been anything like this!Ã¢€