The Magnificent G7 Edition OTB Caption ContestTM is now over. 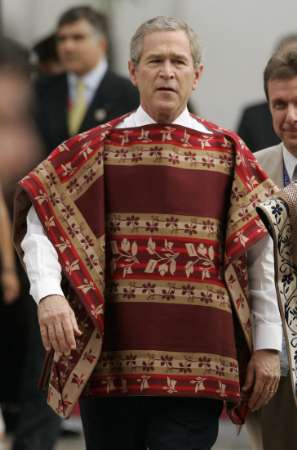 Second: McTrip – Having left his passport at home and having lost his Secret Service detail, W readied himself to steal across the Mexican/U.S. border in disguiseÃ¢€¦.

Third: Hodink – Ã¢€œKaren Hughes read the POTUS job description to me. And dressing like this was not in it. So, IÃ¢€™m thinking I want a big raise or something. IÃ¢€™m serious. This job is hard. Does Kerry still want it?Ã¢€

Roger – Secret Service Agent: Mr. President, I understand the concept of Ã¢€œWhen in Rome, do as the Romans do,Ã¢€ but weÃ¢€™re only going to Taco Bell.

B. Minich, PI – Ã¢€œ President Bush decides now is the time to reveal what made the mysterious bulge under his jacket.

My Secret Service Agent didn’t push me, I pulled him

“Hmmm a strange little county here, Everytime I mention VP Dick Cheney, Everyone asks me if I’m Amigo’s with El Chorizo Grande, maybe that’s somebody Dick knows.”
(With special thanks to Cassandra and Pile On for the Spanish lesson)