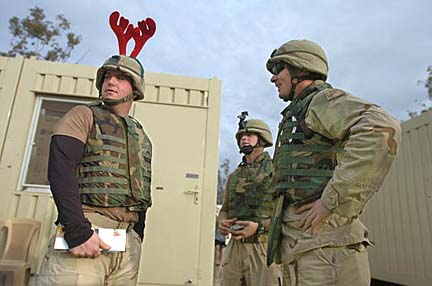 As if this picture wasn’t funny enough. Maybe I just felt overly generous, but this time I chose to extend the Honorable Mention section as there were just too many excellent captions. If you haven’t had a chance you should read through all the captions for this contest as a majority of them are pretty good. Bithead and Crerar were well on the way to a first place tie until “The Doctor” placed his/her entry.

First: The Doctor – Some reporter from Chicago gave Ã¢€˜em to me to wear tonight at the Rumsfeld press conference.

Third: Brandon – Why? Because no one could shoot Rudolph!

Laurence Simon – The hard part was cutting the holes in my helmet to stick them through it.

Zong Ren – DonÃ¢€™t worry Ã¢€” it happens to a lot of guys the first time they get perfumed letters.

Anna S. – What antlers? (editor: This one made me think of Marty Feldman’s “Hump, What Hump?” in Young Frankenstein)

“As long as Rumsfeld is in charge this does not violate Don’t Ask, Don’t Tell, so you are required to continue to wear the new GAYDAR 2000 young fella.”

“So where’s your partner, the one they call Rocky”

“Jees, I wish it had never gotten out that my Grandmother did grow up in Lapland, and that she was run over by a reindeer.”

“I know its rutting seasaon, but leave Cpl. Gonzales alone.”