The Surprise in the CrackerBack Jox Edition OTB Caption ContestTM is now over. 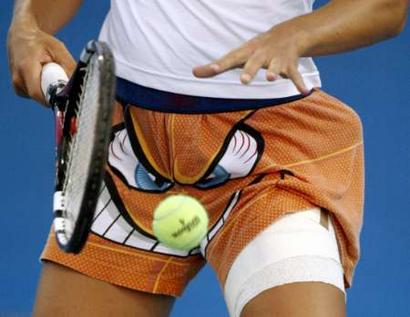 Second: Hodink – Anna Kournikova has tired of her sexy image. Now she wants to win at tennis by beating male opponents which she says she will do by eating their balls

Third: Mythilt – Yesterday, Amanda Monti was let go from her job as a linegirl after she accidently grabbed the wrong ball.

Bithead – “Think of it this way, JohnÃ¢€¦ All the chicks in the stands are now looking at my crotch”
“Yeah but so are the GUYS, Bill. . .”

Roger – Captain Kirk saw the image on the screen, an image from some sports figuring during Earth’s 21st century. Perplexed, he turned to Spock.
“Analysis, Spock!”
“Captain, what we see here is a tennis player wearing shorts bearing an image of what is called a basketball, holding a tennis ball in front. . .of. . .balls.”
“Spock! Balls?!”
“Yes, Captain. If I was to mention the proper medical term, we might get sued by the FCC.”
“Bones!”
“You heard the man! Balls!”

The Great Magnifico’s ball levitation astounded the crowd until little Johnny said, “Hey, its not floating it’s stuck on the end of his . . .”

And of course, The Monday contest has already started.