The It’s A Leaner Edition OTB Caption ContestTM is now over. 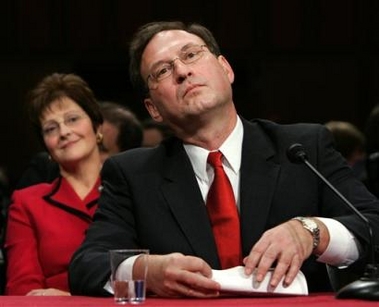 First: Bithead – Spock! Get those shields back up! Prepare to return fire, Mr. Checkov

Second: DaveD – Never having met him in person before, Sam Alito is stunned by the size of Ted Kennedy as the Senator arrives for the committee hearings.

Third: Patrick McGuire – Biden: Judge Alito, I know you canÃ¢€™t comment on cases that might come before you, but could you at least give us an indication as to which direction you would lean on these cases?

Laurence Simon – As Ted Kennedy shifts in his chair, the CapitolÃ¢€™s stabilizers struggle to keep up.

Freakyboy – Judge Alito and his wife lean hard to the left togehter in an old DC prank that results in Ted Kennedy becoming disoriented to the point he falls out of his chair.

Kenny – After another long Senatorial soliloquy, Judge Alito is asked for his interpretation of some of the more … interesting … scenes from Brokeback Mountain.

Sam: “I’d say it leans left Senator Kennedy.”
Martha: “…but it brings a smile to my face.”

Biden: “Frankly, Judge Alito, I’d have fewer reservations if you leaned a little to the left… that’s better.”
Leahy: “Wait a minute, our left is Alito’s right, darn it this is getting more complicated.”
Kennedy: “Gawddam, I think ah’r left is the only left that rahlly mahttahs.”
Biden: “You’re absolutely rightcorrect Teddy, good catch, I owe you one.”
Kennedy: “… and I think ah’ll take it straight up.”
Leahy: “Uh… I think Mrs. Alito is starting to tear up again.”

Thursday contest is already walking to the nearest airport.