The Comrade Penguin Edition OTB Caption ContestTM is now over. 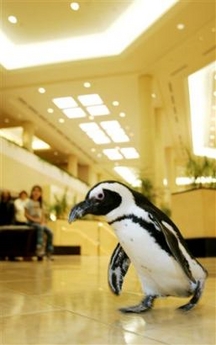 First: Maniakes – Which way to the Linux convention?

Third: radio free fred – All dressed up and no where to go?

McCain – Outtakes from March of the Penguins.

Freakyboy – As Perry walked away from the front desk, he could hear them giggling. He was used to it. It happened every time he inquired about “frequent flyer” miles.

Hoodlumman – Jackie, a South African penguin, storms out of The Peabody hotel after learning that the ice machine on the penthouse floor was out of service.

With a 278 Handicap, he really was KingPinguin

What’s black and white and red all over.
A Communist Penguin

Edgar never could live down the day he slipped on some ice.

Other Contests running this week
Riding Sun has a furball problem