The “Uff-Dah, We’re out of Lutefisk” Edition OTB Caption ContestTM is now over. 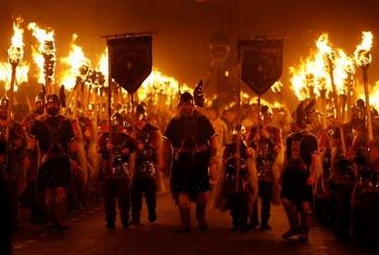 Second: charles austin – Prosecutors in the pending trial of Daunte Culpepper, Bryant McKinnie, Fred Smoot and Moe Williams for their exploits last October on Lake Minnetonka have leaked these pictures said to be taken by the frightened crew.

Third:(tie) Bithead – The new commercial for Bryggerigruppen beer was impressive.

LJD – “Although the Danish response to ‘protest the protests’ appeared violent, the only things killed were lamb and the beer keg.

ken – “Why is it the only thing buried at a Democratic rally/funeral is our dignity?”

Hoodlumman – When Giermund would go to Burger King, it was always a huge ordeal.

The caption crowd at V the K’s Caption This is an astute, but somewhat unsavory crowd.

“Whaddya mean ya don’t know the words to Immigrant Song”

The Monday contest has already kicked in the afterburner.

Other Contests running this week
Riding Sun is raiding the fridge.
Trolling in Shallows picked a good time to win the OTB contest and post a bizarre contest of his own.