The ACME Rocketpack Edition OTB Caption ContestTM is now over. 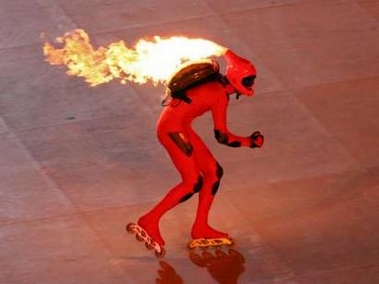 Second: Moe Lane – When you have a degree in English, you take what they offer you.

Eric J. – Maybe the Iranian nuclear program isn’t as advanced as we’ve been led to believe.

LJD – Although promising to smash previous records, the Russian speed skater was disqualified after testing positive for kerosene.

Bithead – I TOLD you you put too much coal into the robot!

FreakyBoy – Dante’s “Mohammed on Ice” is the latest Western spectacle to enrage the Arab street.

Hermoine – “…and it is a renewable fuel coming from the fanny tail pipe. People over 55 must not do this. You know how we feel about fossil fuels.”

Letters From the Edge Award

T. Harris –
Dear Dad,
Thanks for including the pic with your letter. I’d forgotten how much fun it was to roller blade in Hell. I know you’re very busy, being the Prince of Darkness and all, but it warms my heart to know that you’re thinking of me. See ya soon.

Dubya: “And in the future the preferred personal mode of transportion will cause no one any undue concern as it does not rely on fossil fuels.”
Helen Thomas: “Well I see flames, just what does it run on.”
Dubya: “Copies of the Koran.”

Bush had waited patiently for the Deus Ex Machina resolution to the Iraq War.

Apolo Anton Ohno experienced a flame out at an inopportune time.

How the WMD’s were really smuggled out of Iraq.

The Thursday contest has already loosed the dogs of war.