The Grrrr Friends Edition OTB Caption ContestTM is now over. 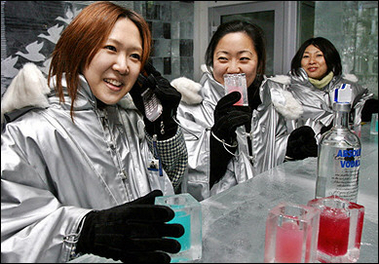 Third: Hoodlumman – The citizens of Kyoto weren’t sure whether or not to blame the cold snap on global warming.

Patrick McGuire – Japan introduces the new nuclear powered cell-phone that never loses power. Unfortunately, due to the risk of exposure to radioactivity, special clothing is required when using them for more than 56 seconds.

thunderbird – Scotty we have three to beam up

McGehee – Sometimes you want to go where everybody loves chow mein.

Rachel Edith – “Too bad jackets only come in silver. Good color for you, American. We prefer gold.”

“WTF, they didn’t put any ice in my drink. Did you get any ice?”

“Yes, I’m going for a ride with Ted Kennedy.. No, don’t worry they tell me all the rivers and lakes here are frozen solid.”

“No my refrigerator isn’t running.”

Other Contests running this week
Riding Sun is a confirmed couch potato.