The Of Mice and Moonbats Edition OTB Caption ContestTM is now over. 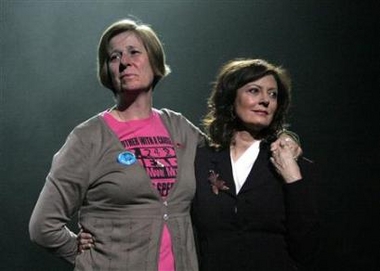 Second: SgtFluffy – The Sequel to “Twins” coming this Summer to a Ranch near you “Twits”

Third: John Burgess – The walk into negligibility is a dark one. . .

Rodney’s Bottom of The Barrel…In the Back Row

The remake of LaVerne and Shirley was extremely popular until Richie Cunningham went to Iraq.

“Well Cindy, your role as the Rocky Horror isn’t so bad, at least you’re not in a remake of Barbarella with Jane.”

what! another picture with two dogs?

Melancholy over the lack of opportunity to betray America that Hanoi Jane had.

The Monday contest has already ridden into town.

Other Contests running this week
Riding Sun has tossed a salad.

Late Night OTB – CCR (The Other One)