The Happy Trails Edition OTB Caption ContestTM is now over. 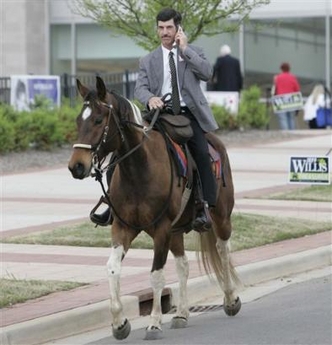 First: David L – What high fuel costs are you talking about?

Third: yetanotherjohn – Please tell me that’s a saddlebag and not a purse.

Patrick McGuire – In an effort to help reduce US dependence on foreign oil, Ford introduces its retro Mustang model for 2007.

Freakyboy – “William Bell, I wish I knew how to quit you.”

Hodink – “Honey, I swear. I’m not horsing around.”

After the 99th time the Cell ringtone “I’ve been through the desert on a horse with no name” rang, Smokey Pete bucked Ed off and stomped him to death.

The parade for Rodney Dill’s 49th birthday was less spectacular than he had hoped for.

Monday contest is already thinking of places to hide next years Easter Eggs.