The Borderline ‘Leven Edition OTB Caption ContestTM is now over. 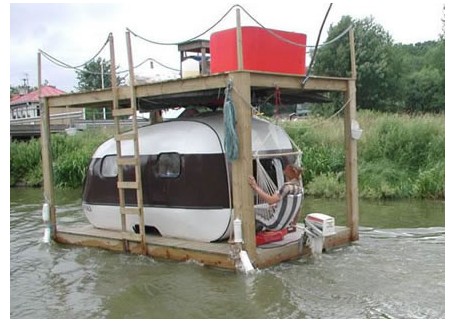 First: charles austin – If “four-poster” describes your houseboat and not your bed, you might be a redneck.

Third: Maggie – For sale by owner: Waterfront Duplex in the historic French Quarter. Willing to negotiate.

elmo – Flood Preparation, an online guide, By Nagin and Blanco.

charles austin – Pirates of the Caribbean II: The Curse of the Black Pearls Before Swine

DaveD – Riverboat gambling returns to New Orleans. When tourists complained that it wasn’t like old times Mayor Nagin shot back, “listen, you make it through one of these trips alive, you’ve beaten the odds.”

Freakyboy – Today, President Ahmadinejad announced yet another new advanced Iranian naval weapon. Reportedly the ultra-fast and highly maneuverable attack ship evades radar and sonar detection using patent “airstream” stealth technology. Ahmadinejad claimed it cruises at speeds in excess of 3,850 knots and carries an arsenal of shrink-rayguns that will “Render the Navy of the Great Satan to mere pieces found in a Battleship Game.”

Maggie – The US Army Corps of Engineers has announced that FEMA trailers will no longer sit idle; unfortunately, they will create increased traffic on the Mighty Mississippi.

The remake of Waterworld was done on a shoestring budget and even though the star of original movie didn’t make an appearance the concensus of the critics was that “Costner still sucks.”

“If Ted Kennedy had had one of these suckers instead of an Oldsmobile he just might’ve been President.”

The Thursday contest has already been picked in the NFL draft.