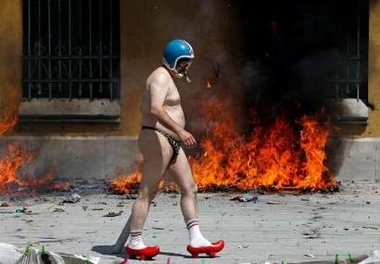 Third: CC – U.S. Special Forces have been searching the Iraq countryside for signs of Al-Zarquawi for months now, but the insurgent leader has proven difficult to locate. One unnamed military source spoke of Zarquawi having “an uncanny ability to blend in with his surroundings.”

charles austin – Ok Al, we get it. The earth is getting warmer and it’s mans fault.

elmo – Though Elmo hadn’t been barhopping and skirt chasing in some time. He never remembered it as being quite like this.

Adjustah – “Good morning, Mr. Vice President, Sir! How was your night off?”

Bithead – How to know when “Casual Fridays” at work, have gone too far

charles austin – Jared needs to go back to 6″ subs.

Greg Dwyer – All the political fighting over the sale of the Washington Nationals to George Soros was taken to another level as Soros announced his plan to hire Bill Clinton as quarterback. His first practice showed why he was not chosen as a tight end.

1. Maggie – Ted Kennedy thinks this disguise will keep him from being recognized as he takes a swim in Hyannis. Proving yet again he’s a flaming fool!

2. SgtFluffy – Ted Kennedy, aka “Ted O”, on the set of his new show,”Jackass the Senator”

3. The Pirate – Looks like Ted Kennedy is back on the sauce.

Expose yourself to Art.

The only time that Scott McClellan had really found Helen Thomas to be irritating were those times when she forgot to take her meds in the morning.

Other Contests running this week
Riding Sun has bubble troubles.