Cassini Huygens Misses On One Mark

I considered posting more on the Cassini-Huygens mission and the Huygens landing on Titan, but a number of blogs had it pretty well covered by the time I could get to it. This angle appeared recently on a mission “mistake” that I hadn’t heard about. Still the overall mission was successful given the time and distance involved.

David Atkinson spent 18 years designing an experiment for the unmanned space mission to Saturn. Now some pieces of it are lost in space. Someone forgot to turn on the instrument Atkinson needed to measure the winds on Saturn’s largest moon.

“The story is actually fairly gruesome,” the University of Idaho scientist said in an e-mail from Germany, the headquarters of the European Space Agency. “It was human error Ã¢€” the command to turn the instrument on was forgotten.”

Eighteen years of work pretty much blown. I think every parent can relate to that at one level or another.

Kent at Trolling in Shallow Water had this to say on the mission in general:

Cassini-Huygens is a remarkable accomplishment for NASA and the European Space Agency, in spite of some quibbles about the quality and availability of the image data. The mission took seven years to reach Saturn and required four gravity assists, two from Venus and one each from Jupiter and the Earth itself. There was no alternative; with a weight of approximately six tons, the spacecraft was simply too massive for any existing launch vehicle to send it directly to Saturn. Another challenge is that it takes radio signals over an hour to reach Saturn from Earth, making real-time control of the landing impossible. Huygens was essentially on its own for the crucial final stages of the landing. NASA, which is in charge of Cassini, has considerable experience at deep space missions using gravity assists, but ESA, which was in charge of Huygens, is a less experienced agency for whom the success of Huygens is a tremendous boost.

He also had quite a bit more to say. Not much of a troll nor very shallow.

The Astronomy Picture of the Day has a large version of the best picture of Titan’s surface, that I’ve seen released. They also refer to a number of other links.

And I probably should throw in the Nasa Cassini-Huygens site for good measure. 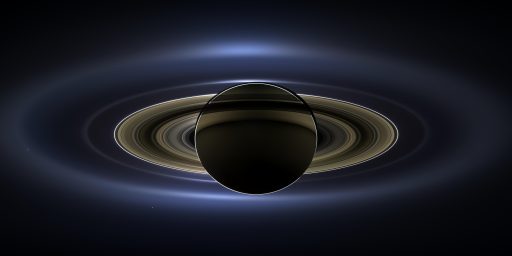