Cee Lo Green caused on New Year's Eve by changing the lyrics of Imagine from "And no religion, too" to "And all religions true."

Cee Lo Green caused on New Year’s Eve by changing the lyrics of Imagine from “And no religion, too” to “And all religions true.”

The change didn’t go unnoticed, and to preempt criticism, he soon tweeted, “Yo I meant no disrespect by changing the lyric guys! I was trying to say a world were u could believe what u wanted that’s all.”

That did little to comfort angered Lennon fans, who lashed out over Twitter. Watch the performance below and then read the angry exchanges over Twitter.

This is followed by a HuffPo classic: a 21 page slideshow capturing Twitter quotes to drive up pageviews.

I find the notion expressed by many commenters that this is some horrendous insult to Lennon and his legacy absurd. His version has been preserved for the ages and been played countless times over the decades since it was released. Green has the artistic license to change is around a bit to put his spin on it.

While my sympathies are with Lennon on this one, Green’s alternate is interesting. On the one hand, it’s a sweet sentiment. On the other, it’s an absurdity: the major religions directly contradict one another on major doctrinal tenets; they can’t all be true.

At any rate, the video’s below. Green’s performance begins at the 3:56 mark. 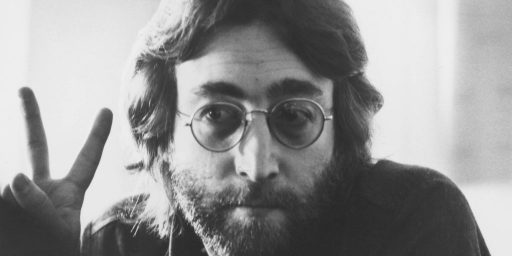