Vladimir Putin has accepted the position of General Secretary of the Communist Party chairman of the United Russia Party, further consolidating his power. Putin has already said he will serve as prime minister once his protege, Dmitry Medvedev, is sworn in as president on May 7. The premier is subservient to the president in Russia and historically has been occupied by politically weak technocrats but the post of party leader will now give Putin extra clout. United Russia won 315 of the 450 seats in the State Duma (lower house of parliament) last December, meaning the party has a two-thirds majority. This is enough to change the constitution or to start impeachment proceedings against the president.

“Putin does not want to be what we call a technical prime minister in Russia, a person who can be removed in 30 seconds if the president wishes to do so; he wants to be a prime minister with his own power base,” Alexei Pushkov, a professor of international relations and a journalist, told Reuters. “Basically, Medvedev will not be able to rule without Putin’s agreement.”

From the tsars through Communist times, Russia has long been accustomed to a single, all-powerful leader and many analysts here doubt whether a double-headed system of government can function effectively.

Opinions differ about whether Putin’s motive in taking the premier’s job and the party leadership is to shore up Medvedev — a 42-year-old lawyer who has never held elected office and is viewed with disdain by Kremlin hardliners — or to control him. Sergei Markov, a political analyst and United Russia member of parliament, told reporters at the congress: “It (the appointment as party chairman) strengthens Putin’s political weight as national leader. Dmitry Anatolyevich Medvedev is leader of the state and of the Russian Federation, but the political leader of the country remains Putin.”

Then again, that was going to be the case even before this move. Putin’s just hedging his bets.

Moreover, as Joshua Keating points out, Putin will lead United Russia without actually joining it.

As chairman Putin now effectively controls the State Duma, where United Russia holds an overwhelming majority. This could give him the power to approve new legislation, change the Russian constitution, or initiate impeachment proceedings against Medvedev. United Russia’s overwhelming power is already drawing comparisons to the old Soviet Communist Party. Together with last week’s announcement that the prime minister (who, incidentally, is also Putin) will control the appointment of regional envoys, there seems to be a major restructuring of power away from the Kremlin to the Russian "White House," where Putin will be taking up residence next month.

But by remaining somewhat removed from the party, Putin can still appear above the  fray of the Duma and maintain his highly personalized political "brand." He is also free to criticize the party as he did yesterday, saying, "It should be debureaucratized and cleansed of strange people pursuing only selfish goals."

Indeed. We certainly wouldn’t want that. 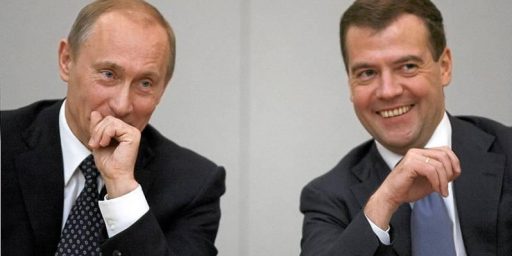