A couple of comments on my posts of the last couple of days make it apparent that I should state directly something that seemed obvious:  A change in administration, especially one from an ostensibly conservative Republican to a pragmatically liberal Democrat, brings a natural evolution in the editorial perspective of this blog.

Since founding OTB almost exactly six years ago, I’ve been a mostly friendly critic of a president for whom I twice voted; for the next four years or more, I’ll be in the role of loyal opposition.   I’ll continue to be fairminded and analytical, trying to understand and fairly comment on the complex realities of public policymaking and otherwise call ’em like I see ’em.  But I’ll almost certainly disagree more often with President Obama’s goals than I did those of President Bush, with whom I differed mostly on execution.

Given the ecclectic collection of bloggers at OTB, Alex Knapp and I will likely flip roles in that regard.  My guess is he’ll defend Obama more than I will, disagreeing from the standpoint of someone who supported his election.  Given their choice of topics, you’ll likely not see a whole lot of difference from Steve Verdon, Dave Schuler, Chris Lawrence, and others.

Regardless, while we may disagree with him on any number of programmatic issues and criticize him on that front several times a day, I think I speak for all of my colleagues in wishing him and his administration well.  Whether we voted for him or not, he’s the only president we have and the economy is in peril and American troops are in harm’s way on two fronts.  We need things to go well.

As one who has voted Republican in every presidential election for which I’ve been eligible (1984-2008) I can only hope my party takes its time out of power to recalibrate its platform and provide a viable alternative for the years ahead.   For 2012, I’d either like to lose in a landslide because the Obama administration is doing such a splendid job or win back the White House with a candidate who can match Obama as a spokesman for his cause, besting him in a spirited, civil debate on the basis of a superior plan for the future. 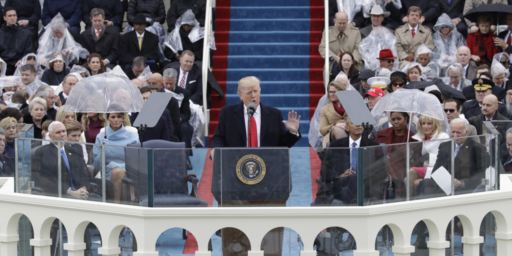