Chart Of The Day: Economics And Fertility

Via Calculated Risk, comes this chart showing that the Great Recession has impacted more than just people’s pocketbooks: 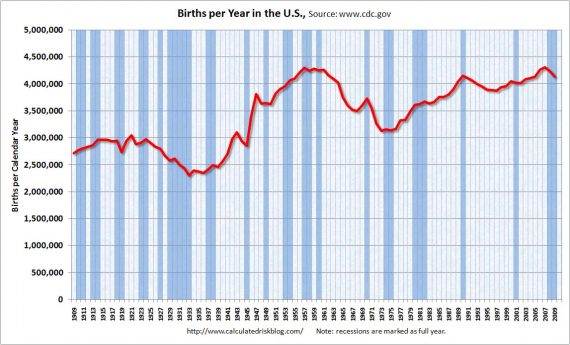 Births have declined for two consecutive years, and are now 4.2% below the peak in 2007. I suspect certain segments of the population were under stress before the recession started – like construction workers – and even more families were in distress in 2008 and 2009. Of course it takes 9 months to have a baby, so families in distress in 2009 probably put off having babies in 2010 too.

Notice that the number of births started declining a number of years before the Great Depression started. Many families in the 1920s were under severe stress long before the economy collapsed. By 1933 births were down by almost 23% from the early ’20s levels.

There could be other reasons for the decline in births, of course, including demographics, but the fact that the 2007 decline came at a time with the birth rate was on an up-tick argues strongly that families in financial distress, or even financial uncertainty, are putting off having children,