Cheering for the Laundry

It seems that some liberal bloggers who used to complain about the Bush administration are being intellectually honest and also complaining when the Obama administration does the same thing.  BooMan, for one, doesn’t like it.

What brought people together into progressive blogging communities and networks was related to policy (the invasion of Iraq, torture, illegal surveillance, regressive taxation, bad environmental policy) but also other things (a one-sided corporate media, incompetent government, and lack of meaningful and effective resistance by the Democrats). But notice something. The progressive blogosphere rarely if ever engaged in serious policy debate about legislation pending in Congress. Insofar as it was discussed at all, it was normally opposed. And that kind of blogging can be habit-forming. What was appropriate when the Republicans ran everything is carried over and used against the Democrats.

Now, I am of two minds about this. On the one hand, what was wrong when Bush and the Republicans did it is also wrong when Obama and the Democrats do it. Holding government accountable is important no matter who is currently in power. And the Democrats don’t have everything right on policy. On some things they are dead wrong. On others, they are divided and unable to pass good policy in the face of united opposition. So, people who really care deeply about policy and think the Democrats can and should be doing better ought to be speaking up and offering constructive advice or criticism. I think this is generally what Glenn Greenwald is doing. On the other hand, most of us got into blogging because we recognized the singular danger the Republican Party represented to our country, and our number one goal was simply to get them out of power. Like the teabaggers, we weren’t looking to make compromises on legislation but to defeat it. But unlike the teabaggers, we had facts to support our positions. If we got into blogging and political activism to put the Democrats in power, should we not be focusing on helping them pass their agenda and stay in power?

If one’s motivation for blogging is to cheer for the party team and root against the opposition, then BooMan is correct.  Most of us, however, are commenters or activists motivated by issues and ideas rather than political party.   To be sure, ideology and party has some overlap.  But not nearly as much as the party machines would have us believe.

For a hard core Progressive, frankly, “denying that there is a new situation in Washington” is perfectly reasonable.

Yes, Obama opposed the invasion of Iraq.  But he’s continuing the Bush policy of gradual withdrawal under the terms of the November 2008 Status of Forces Agreement.  And he’s essentially continuing the Bush policies on interrogation and surveillance, too.   So, if those issues are what animated you — as they did Glenn Greenwald and others — then not much has changed.

Now, if you’re primarily interested in implementing progressive tax and environmental policies then, yes, things are marginally better for you under the new regime. But just marginally.

If you’re a dedicated tax wonk or a hard core libertarian, a 3% hike in the top marginal rate is a huge issue.  If you’re after radical leveling of the income distribution, however, then it’s small beer.

On environmental regulation, Obama is well to the left of Bush.  But he’s operating in the same system.   So, for example, getting China and India to radically change what they’re doing is still next to impossible.   And getting a supermajority in the Senate to ratify a new international treaty?  Good luck with that.

BooMan is, in essence, trying to square a circle.  On the one hand, he correctly notes that the thing that got the progressive blogosphere so well organized was passion, not wonkish interest in the details of policy.   On the other, he now wants these same people to be satisfied with the marginal differences that a change from America’s center-right party to its center-left party can actually achieve — and yet bring the same energy to the game.   It just doesn’t work that way.

See, for example, Bob Cesca, a published author who can’t quite articulate a response — simultaneously conceding that “BooMan makes an interesting point” and yet filing his post under “Just Like Bush.”

Accountability is mandatory. I think there are more constructive and effective ways of going about it. Every job requires a unique set of tools. You don’t use a hammer on a Phillip’s head screw, etc, etc…

What tools are appropriate and when, he doesn’t say.

Armando Llorens‘ rejoinder — that “the Left blogs can and should be a voice for the Left Flank of the Democratic Party. I believe that Left blogs should fight for policies they believe in, not the pols or the political parties” — is much more realistic as an organizing principle for the progressive blogosphere.   In my judgment — granted, that of a Goldwater-Reagan Republican — it’s an uphill fight politically, since the Left Flank of the Democratic Party represents an infinitesimal fraction of the population.   But the nature of the blogosphere — both Left and Right — is that it’s going to disproportionately represent elite opinion rather than a pragmatic center.

See, for example, Avedon Carol, who goes well to the left of both BooMan and Armando:

[W]e need to fight the corporations, not lay down for them. Obama and the Democratic leadership are pushing right-wing corporate policies. That’s not a theory. And it’s not about “ideology” in the sense these comfortable gentlemen are speaking when they explain that we have to be “pragmatic” and “realistic”. It’s about hungry bellies and broken limbs that might be yours and your children’s and siblings’ and friends’ in the very near future. This isn’t abstract; it’s about the simple, obvious fact that which way the money goes determines how our lives go. Our lives. We don’t actually care about which politician you happened to fall in love with.

That’s a one percent position right there.  But probably half of that one percent have a blog!

And, no, I’m not poking fun.  While my small government libertarianism polls better, it’s in reality a decidedly fringe position as well.  And likewise vastly over-represented in the blogosphere. 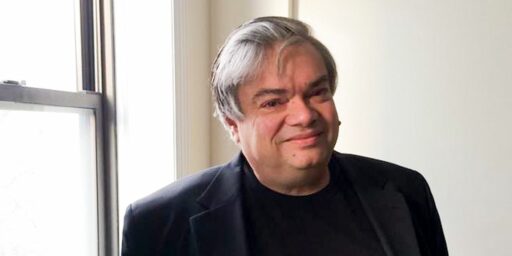