Vice President Dick Cheney got booed after a weak first pitch at the Nats’ home opener. The first pitch of the Washington Nationals’ second season at Robert F. Kennedy Memorial Stadium was low and away, bouncing in the dirt before being scooped up by catcher Brian Schneider.

For that, Vice President Cheney received a round of boos from the home crowd this afternoon. But the catcalls didn’t last long before the fans cheered for the Nationals, who took the field in their white uniforms with red trim against the New York Mets.

My guess is someone is getting fired over this. I nominate this woman:

“This is our team,” declared Lynette Jackson, 50, of D.C., who called in sick to her job with the federal Centers for Medicare and Medicaid Services so she could attend the game with her family. “I called in to ask for leave and didn’t tell them why.”

Hint: If you’re going to play hookey from work, don’t announce it in the town’s biggest newspaper.

Update (4/12): Jane Hamsher, John Aravosis, Ezra Klein, and others note that the booing started as soon as Cheney walked onto the field. A video at Crooks and Liars confirms. I figured as much.

That’s not surprising, exactly, now is it? The administration is doing very badly in the polls and the vice president is among its least popular figures. And D.C. isn’t exactly friendly territory even for relatively popular Republicans. Even when one selects out the demographic that can afford to attend professional sporting events, the Beltway is hostile territory.

As to the pitch, it would not at all surprise me if Cheney were wearing a bullet proof vest under that Nats jacket. Plus, he’s a fat old man. 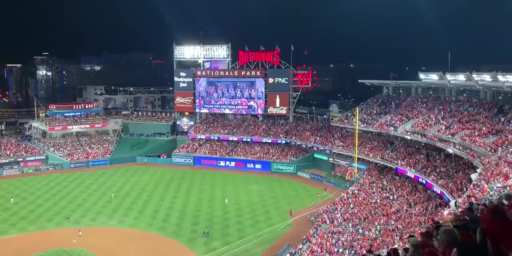 Trump’s World Series Trip Greeted By Boos and Chants Of “Lock Him Up!”