Like it or not, human rights is only at the top of the agenda for countries that otherwise don't much matter. 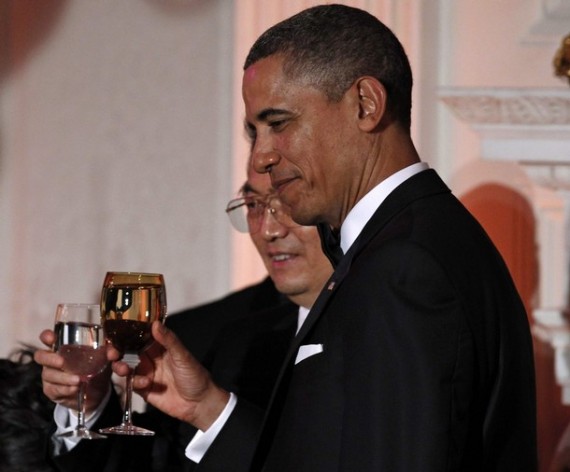 Last night, I awarded Tweet of the Day honors to @pcam‘s quip,  “The 2009 Nobel Peace Prize winner holds a State Dinner for a man who has the 2010 winner under House Arrest.”

This morning, I reflect on this at great length in a New Atlanticist post titled “China’s Seat At The Big Table.”  It defies excerpting, so I’ll direct you there.   But I’ll give you the bottom line here:

It’s quite possible that Hu understands that greater freedom for his people will be necessary, not only for China to fully assume its rightful place as a leader in the community of nations, but to sustain its economic momentum.  China will either remain cut off from the world in order to prop up the regime or it will be a full participant in the Information Age.  Hu surely knows that.

In the meantime, however, the leaders of the world’s two largest economies will continue to work together to seek mutual advantage.  Like it or not, human rights is only at the top of the agenda for countries that otherwise don’t much matter.   We manage to put these concerns aside when dealing with oil-rich emirates, after all.  Surely we can do it with the second most powerful country on the planet.

Bonus: We get to keep the pandas five more years.