Last November came the reports of the arrest of a Chinese spy ring in California. Today comes a follow-up from Bill Gertz of the Washington Times entitled Fumbled China spy probe an intelligence failure and the details aren’t very good on either side. This is the first of 3 articles. It sounds like a Mad Magazine Spy-vs-Spy cartoon.

Tai Wang Mak dialed a phone number in Guangzhou [ed: Canton], China.
The man who answered, Pu Pei-liang, was a researcher at the Chinese Center for Asia Pacific Studies at Zhongshan University, known to U.S. intelligence officials as CAPS.
“I’m with Red Flower of North America,” said Mak, a Chinese national working as an engineer in Los Angeles for Hong Kong-based Phoenix Television….

Mak and Pu, investigators say, were undercover military intelligence officers with the Second Department of the People’s Liberation Army, the spy service well-known to U.S. counterspies as 2 PLA.
Investigators say Tai Mak’s brother, Chi Mak, headed a family spy ring in Los Angeles. After his Oct. 28 arrest by the FBI, Chi Mak, a naturalized citizen and electrical engineer with a major American defense contractor, told investigators that he had supplied sensitive Navy weapons secrets to the Chinese since 1983.
The fact that the spy ring went undetected for two decades was a major counterintelligence failure. Worse, the U.S. government would go on to bungle the case.

Why bungled? Because they were tipped to the spy ring by an informant in China:

The new source identified the spy ring in Los Angeles that investigators said was run by Chi Mak, an electrical engineer with the defense firm Power Paragon, a subsidiary of the Fortune 500 company known as L-3.
The source said the Chinese military was gaining sensitive technology and information on Navy warships. What’s more, China was buying ostensibly commercial goods and diverting them to the military.
Under pressure to adopt a counterintelligence culture instead of a “cop” mentality, the FBI hoped to play the spy ring and see where it led.
Counterintelligence is part art, part science, a discipline aimed at identifying and exploiting or stopping foreign spies. Law enforcement is easier: You identify the bad guys and arrest them.
But the government mishandled the case. One problem was that the FBI and the CIA had conflicting goals. The CIA was afraid to lose its prized source, the Chinese recruit. The agency did not want the FBI to make arrests immediately, since swift action would alert the Chinese to a mole.

Obviously not a simple black-and-white decision. So what happened?

By the time formal indictments were issued Nov. 15, the most serious charges against Chi Mak and the three others had been dropped. Tai Mak’s wife was excluded altogether, though she was charged separately with running an illegal marriage-fraud network that helped immigrants gain entry into the United States.
The three remaining suspects were indicted on relatively minor charges of failing to register as foreign agents. The initial charges could have resulted in prison terms of up to 25 years, but the lesser charges carried maximum sentences of 10 years. Chi Mak, his wife and Tai Mak all pleaded not guilty.
So what changed? U.S. government sources say that petty squabbling between prosecutors and investigators jeopardized the case.
The more serious charges were dropped because the FBI counterintelligence team that conducted the investigation got into a dispute with the U.S. attorneys in Los Angeles who were in charge of the prosecution.
The FBI fully expected that search warrants would unearth classified data, so prosecutors balked when much of what was found was not officially classified as secret.
“Nothing I passed [to China] was classified,” Chi Mak told investigators shortly after his arrest.
He was right. Investigators say the lack of classified documents revealed that the spies had done their homework.
Chinese intelligence-gathering services exploited the fact that Navy officials underclassified some of the most sensitive information about weapons systems to make it easier for private defense contractors to use the data.

The standards of classification are pretty plain I would say, but the espionage laws are now the issue

Espionage laws are so difficult to apply that prosecutors almost need a confession to be able to make their case.
The current statute, enacted in 1917, requires prosecutors to prove “intent or reason to believe that the information is to be used to the injury of the United States, or to the advantage of any foreign nation.”
This standard often forces the release of intelligence or defense information to prove national security was harmed.
David Szady, head of FBI counterintelligence until this year, said loss of sensitive-yet-unclassified information can do real harm to national security.
The technology passed to China in the Mak case was proprietary corporate trade secrets or export-controlled, but did not carry the “secret” or “top-secret” label. Chi Mak had access to Connecticut-based submarine manufacturer Electric Boat, for example, as if he were one of their own employees, Szady said.

The laws are from 1917? And no new laws on international industrial espionage? Sounds like Congress needs to do something.

China Continues Espionage Against the USA 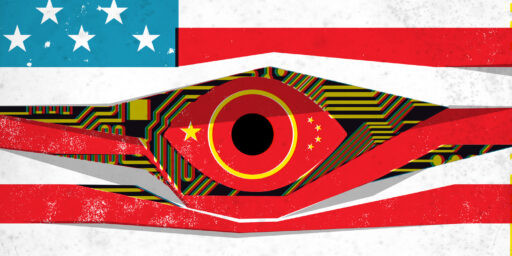