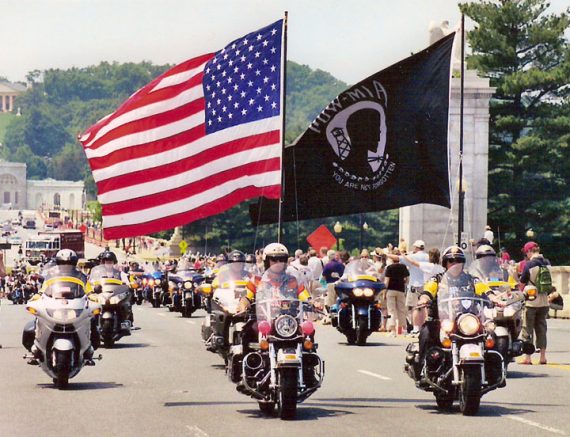 For some bizarre reason, Chris Matthews decided yesterday to bash the decades old Memorial Day tradition of Rolling Thunder during another one of his slaps at Sarah Palin:

Perhaps Matthews doesn’t care, perhaps he’s just ignorant, but a few minutes on Google would have told him what Rolling Thunder is about:

To appreciate how far Rolling Thunder has come, you must go back to where and how and why the Rally got started.

It was a silent collective cry of American Prisoners of War (POWs) left behind that prompted Ray Manzo, Corporal USMC, to try in some small way to make things right. As the summer of 1987 approached, Manzo observed some veterans by the Reflecting Pool near the Vietnam Veterans Memorial Wall in Washington, D.C. and asked them for help. His idea: Host a motorcycle run in the nation’s capital to show the country and the world that abandoned American soldiers in Vietnam still mattered to their fellow servicemen and the country for which they sacrificed their freedom.

From that day on, things began to happen. Fellow veterans embraced his idea and began to help. There was retired Army Sergeant Major John Holland, head of the American Foundation for Accountability of POW/MIAs, Ted Sampley with Homecoming II Project at the Last Firebase vigil, retired Marine 1st Sergeant Walt Sides, president of the non-profit Warriors Inc, and Bob Schmitt who had a POW family member.

Walt Sides recalled how his first meeting with Manzo left a lasting impression. “I remember it was a pretty, sunny, warm day not long after Memorial Day in 1987. I can still see him walking up the steps towards us (Holland, Sampley, and Schmitt). He looked just like a Marine climbing those steps,” Sides claims, “kinda’ dumb looking, with a look that said: ‘Boys, I need some help.’ ” It’s an old truth that a Marine can always spot a fellow Marine, no matter how out of uniform or far away.

Manzo explained his idea and asked, “Could we do a run of motorcycles for the cause?” According to Sides, “John Holland and I looked at each other and said: Let’s do it!” And it was then the name “Rolling Thunder” was adopted for the Rally. Schmitt was staring in the direction of the Memorial Bridge while listening intensely to Manzo’s idea and simply blurted out, “It will be the sound of rolling thunder coming across that bridge.” The name stuck.

Anyone who’s been in D.C. on a Memorial Day since then will tell you there’s nothing quite like it, and if you’re anywhere on the East Coast you’ll see motorcycles on the highways heading towards D.C. today. It’s too bad Matthews was too wrapped up in scoring political points to bother to find out who he was smearing.

Also, someone please tell Matthews that some of those “outlaw” bikers he’s talking about are doctors, lawyers, and accountants.