Christopher Hitchens is losing his voice. He misses it. 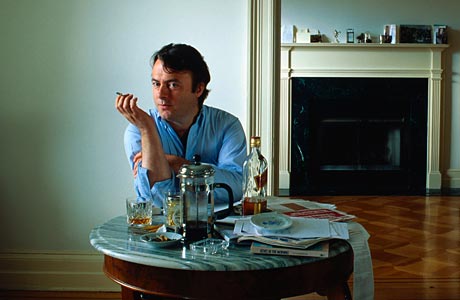 Christopher Hitchens is afflicted with esophageal cancer and is losing his voice. He misses it.

Like health itself, the loss of such a thing can’t be imagined until it occurs. In common with everybody else, I have played versions of the youthful “Which would you rather?” game, in which most usually it’s debated whether blindness or deafness would be the most oppressive. But I don’t ever recall speculating much about being struck dumb. (In the American vernacular, to say “I’d really hate to be dumb” might in any case draw another snicker.) Deprivation of the ability to speak is more like an attack of impotence, or the amputation of part of the personality. To a great degree, in public and private, I “was” my voice. All the rituals and etiquette of conversation, from clearing the throat in preparation for the telling of an extremely long and taxing joke to (in younger days) trying to make my proposals more persuasive as I sank the tone by a strategic octave of shame, were innate and essential to me. I have never been able to sing, but I could once recite poetry and quote prose and was sometimes even asked to do so. And timing is everything: the exquisite moment when one can break in and cap a story, or turn a line for a laugh, or ridicule an opponent. I lived for moments like that. Now, if I want to enter a conversation, I have to attract attention in some other way, and live with the awful fact that people are then listening “sympathetically.” At least they don’t have to pay attention for long: I can’t keep it up and anyway can’t stand to.

In some ways, I tell myself, I could hobble along by communicating only in writing. But this is really only because of my age. If I had been robbed of my voice earlier, I doubt that I could ever have achieved much on the page. I owe a vast debt to Simon Hoggart of The Guardian (son of the author of The Uses of Literacy), who about 35 years ago informed me that an article of mine was well argued but dull, and advised me briskly to write “more like the way that you talk.” At the time, I was near speechless at the charge of being boring and never thanked him properly, but in time I appreciated that my fear of self-indulgence and the personal pronoun was its own form of indulgence.

To my writing classes I used later to open by saying that anybody who could talk could also write. Having cheered them up with this easy-to-grasp ladder, I then replaced it with a huge and loathsome snake: “How many people in this class, would you say, can talk? I mean really talk?” That had its duly woeful effect. I told them to read every composition aloud, preferably to a trusted friend. The rules are much the same: Avoid stock expressions (like the plague, as William Safire used to say) and repetitions. Don’t say that as a boy your grandmother used to read to you, unless at that stage of her life she really was a boy, in which case you have probably thrown away a better intro. If something is worth hearing or listening to, it’s very probably worth reading. So, this above all: Find your own voice.

It’s good advice which I don’t always heed. While I’ve managed to suppress much of the damage that academic training does to writing, I haven’t escaped it entirely. Analytical detachment is a great thing for doing analysis; not so much for presenting argument.

Seen many places yesterday, but Andrew Exum‘s pointer today got me to blog this and keyed me in on the writing angle.