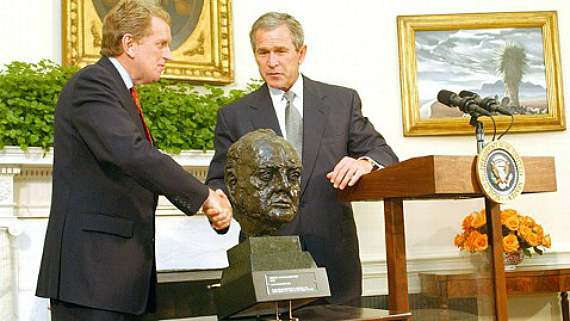 Jake Tapper at ABCNews adds a new twist to the mystery of the bust of Winston Churchill:

Like a plot twist in a sitcom, IT TURNS OUT THERE ARE TWO CHURCHILL BUSTS!!!!!

The other one was loaned to President George W. Bush by British Prime Minister Tony Blair.

Says James Barbour, Press Secretary and Head of Communications for the British Embassy, “The bust of Sir Winston Churchill, by Sir Jacob Epstein, was lent to the George W Bush administration from the UK’s Government Art Collection, for the duration of the Presidency. When that administration came to an end so did the loan; the bust now resides in the British Ambassador’s Residence in Washington DC. The White House collection has its own Epstein bust of Churchill, which President Obama showed to Prime Minister Cameron when he visited the White House in March”

That other Churchill bust dates back to the Nixon administration, it turns out.

“That’s not really what’s important here,” Barbour said. “Both President Obama and Prime Minister Cameron have repeatedly underlined that our two countries remain the closest of allies. The Churchill Bust story is a silly diversion – let’s get on and focus on seeing who wins most medals in the Olympics.”

First, let’s concentrate on the highlighted text. Tony Blair loaned a work of art from the UK’s official collection to the United States, with the understanding that it would be in the White House for the duration of the Bush Presidency. This means that Barack Obama didn’t toss out the bust, it was required to be returned to the British under previous agreements. There’s another bust of Churchill in the residence that has been there for at least the last 40 years.

Is everyone happy now? Can we get back to talking about crap that matters? And can I officially say that this has been the stupidest political meme I’ve ever seen?