Chris Cillizza examines Hillary Clinton’s claims that her demonstrated ability to appeal to white, working class voters makes her the better candidate in the Fall. Examining the state-by-state races, he figures only 14 states will truly be competitive.

A glance at these 14 states — and the polling to date in each — suggests that Clinton is clearly the stronger Democrat in three: Florida, Ohio and Pennsylvania. That trio of states, which includes the two central battlegrounds in the 2000 and 2004 presidential contests, have 68 electoral votes between them.

Obama would seem to have a discernible edge over Clinton in six states: Colorado, Iowa, Minnesota, Oregon, Virginia and Washington. These states have a total of 57 electoral votes.

Neither Clinton nor Obama can make an air-tight case that she (or he) would be stronger against McCain in Maine (4 electoral votes), Michigan (17), Missouri (11), New Hampshire (4) and New Mexico (5).

Taken as a whole, Clinton’s argument that she is the stronger potential general election candidate against McCain is true — to a point. She is stronger — although not by much — if the playing field in 2008 is a mirror image of the battlegrounds of 2004 and 2000. Clinton, at the moment, is more strongly positioned to win in three states — Florida, Pennsylvania and Ohio — that have decided the winner in the last two presidential contests.

One of Cillizza’s commenters actually looks at the numbers, as currently reported by RealClearPolitics, and breaks down the state-by-state numbers. The bottom line is in contrast with Cillizza’s guess:

Still, given that Clinton is more likely to win traditional large battleground states of Florida, Missouri, Ohio, and Pennsylvania whereas Obama is looking to pick off a handful of traditional Republican states trending purple, I’d say Clinton has the slight advantage.

But that argument only holds if you believe two things: First, that the playing field will be essentially unchanged between 2000/2004 and 2008 and, second, that current polling is an accurate predictor of what things will look like in November.

He’s dubious of both those assumptions, as is Bernard Finel, who believes, Obama is “the better candidate and he’s likely strong enough to win. Her marginal superiority on the latter measure does not overcome his dramatic advantage in the former.”

The contrary view is expressed by Dodd Harris who, as noted previously, argued last night on OTB Radio that the Democrats will have buyers’ remorse this Fall, wishing they’d nominated Hillary Clinton rather than upstart Barack Obama. He’s of the belief that Obama’s tendency to commit gaffes on the campaign trail is likely to intensify, the his vague “hope” and “change” appeals will wear thin, and that his dismissal of all criticism as illegitimate and (via surrogates) racist will hurt him in November.

My view of Obama’s candidacy, from the beginning, has been that he started at the apex of his popularity and that it could only go down through prolonged exposure. I still believe that’s the case. He began as a tabula rasa onto whom people could project their fantasies of a candidate; he’s revealing himself to be a mere mortal.

Still, he’s ultimately the better candidate. While Obama has his problems, half the country starts out strongly disliking Clinton as a human being. Given that this sentiment has been hard won in sixteen years in the public eye, I’m confident that it will only be hardened by several more months of exposure. By contrast, even those who wouldn’t dream of voting for Obama rather like him.

The Democratic nominee has every advantage in this contest but it’s quite conceivable that John McCain could nonetheless win. He vastly outpolls the generic Republican ballot and he’s got a lot of strengths that will appeal to moderates.

Obviously, if the Democrats lose again, they’ll wish they’d nominated someone else. That’ll hardly be evidence, though, that Clinton would have done any better. I tend to agree with Finel here:

Obama’s “hope” and “change” bubble could burst or he can continue to inspire. Clinton, by contrast, is more likely to win a nasty slugfest. The end result of that victory, though, would be another four years of partisan rancor at DEFCON 2. McCain and Obama each have the potential, at least, of ratcheting that down a couple notches. 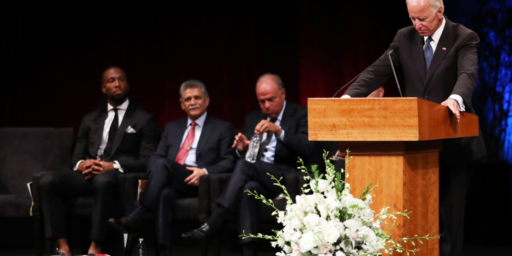 Joe Biden, John McCain, And The State Of American Politics