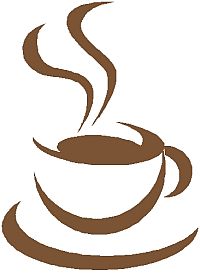 Coffee and tea drinkers get reduced heart disease in addition to the more immediate, manifest joys of indulging:

Researchers in The Netherlands found:

And for coffee they found:

* Coffee drinkers with a modest intake, two to four cups per day, had a 20 percent lower risk of heart disease compared to those drinking less than two cups or more than four cups.
* Although not considered significant, moderate coffee consumption slightly reduced the risk of heart disease death and deaths from all causes.