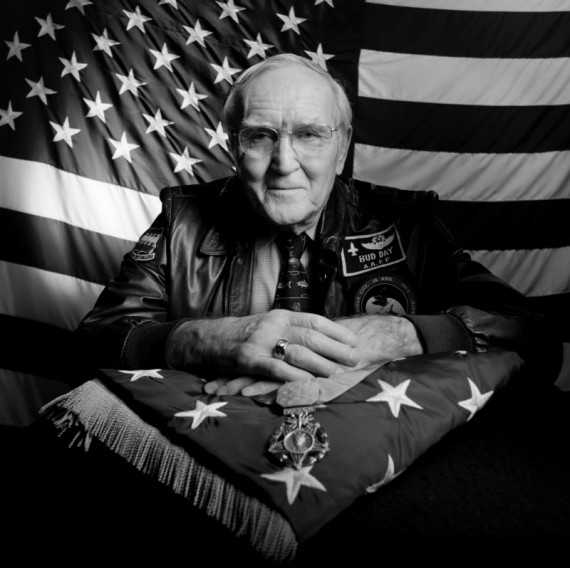 Retired Col. George “Bud” Day, a Medal of Honor recipient who spent 5½ years as a POW in Vietnam and was Arizona Sen. John McCain’s cellmate, has died at the age of 88, his widow said Sunday.

Day, one of the nation’s most highly decorated servicemen since Gen. Douglas MacArthur and later a tireless advocate for veterans’ rights, died Saturday surrounded by family at his home in Shalimar, after a long illness, Doris Day said.

“He would have died in my arms if I could have picked him up,” she said.

Day received the Medal of Honor for escaping his captors for 10 days after the aircraft he was piloting was shot down over North Vietnam. In all, he earned more than 70 medals during service in World War II, Korea and Vietnam.

He was an enlisted Marine serving in the Pacific during World War II and an Air Force pilot in the Korean and Vietnam wars.

In Vietnam, he was McCain’s cellmate at one camp known as the Plantation and later in the infamous Hanoi Hilton, where he was often the highest-ranking captive. During his imprisonment, the once-muscular, 5-foot-9 Day was hung by his arms for days, tearing them from their sockets. He was freed in 1973 — a skeletal figure of the once dashing fighter pilot. His hands and arms never functioned properly again.

“As awful as it sounds, no one could say we did not do well. (Being a POW) was a major issue in my life and one that I am extremely proud of. I was just living day to day,” he said in a 2008 interview with The Associated Press. “One really bad cold and I would have been dead.”

In a statement Sunday, McCain called Day a great patriot and said he owed his life to the man. “He was the bravest man I ever knew, and his fierce resistance and resolute leadership set the example for us in prison of how to return home with honor,” McCain said.

Today brings the sad news that my dear friend and comrade, Colonel George E. ‘Bud’ Day, USAF (Ret.) has passed away. I owe my life to Bud, and much of what I know about character and patriotism. He was the bravest man I ever knew, and his fierce resistance and resolute leadership set the example for us in prison of how to return home with honor. I will have much more to say about Bud’s courage, kindness and sense of honor and duty this week. For now, I want to draw Americans’ attention to the passing of this good man and great patriot, and to extend my deepest, most heartfelt condolences to Bud’s wife, Dorie and his children. I will miss him terribly.