The defense authorization law requires the Defense Department to go back to a single camouflage pattern.

The defense authorization law requires the Defense Department to go back to a single camouflage pattern.

The compromise defense authorization bill for 2014 includes a provision that directs the Defense Department to “to adopt and field a common combat and camouflage utility uniform, or family of uniforms, for specific combat environments, to be used by all members of the armed forces.”

And if that becomes law, as appears likely, it would change the future image of the joint force.

For years, lawmakers have been annoyed by the military services’ increasingly elaborate wardrobe of camouflage variants designed for the same forward-deployed environments. Over the past decade, the four services have developed at least seven new combat utility uniforms, each with its own unique design.

In 2009, Congress began to question the military’s growing array of ground combat uniforms and ordered the Pentagon to develop “joint criteria” for camouflage uniforms. But the Pentagon was slow to respond and ultimately opted to check the box with “standards” that addressed textile quality rather than pattern and clothing design, which many experts said was the lawmakers’ intent.

The new law would mark a return to Cold War-era fashion, when for years all troops wore the same uniform when deployed to the same place. The so-called Battle Dress Uniform had only “woodland” and “desert” variants.

That began to change when the Marine Corps fielded its digital-style MARPAT camouflage pattern in 2002, in turn prompting each service to develop its own new pattern — some of which have come in for criticism in the ranks, such as the Air Force’s “tiger stripes” and the Navy’s “aquaflage.”

In several instances, those efforts were botched, scrapped and replaced with more new designs, costing millions of dollars in design fees and replacement costs, according to the Government Accountability Office.

Inside the ranks, the issue is controversial. While distinct uniforms may be good for morale and cultivate a sense of pride among the individual services, others say the array of stripes and pixelated patterns is an unnecessary expense and makes no sense, since the underlying goal is to make troops less visible in a field environment, regardless of their service branch.

This year, the Joint Staff’s top enlisted adviser, Marine Sgt. Maj. Bryan Battaglia, said the mix of uniforms makes the U.S. military look like a “Baskin-Robbins” and signaled his support for a common uniform.

But Marine Corps Commandant Gen. James Amos recently said preserving the Corps’ MARPAT pattern is a top priority and declared that his service will stick to it “like a hobo to a ham sandwich.”

The report was published Thursday; the law was passed Friday, shifting the subjunctive to the indicative. Few things spark more consternation in military circles than changes to the uniform—witness the furor over Eric Shinseki’s making the black beret the official Army headgear or the recent flap over the rumored shift to the Dan Daly hat for Marines—but Congress is likely to prevail here. It’s expensive and silly for American forces deployed to the same tactical environment to wear different camouflage.

The Washington Post recently documented the sheer number of patterns out there and the associated costs: 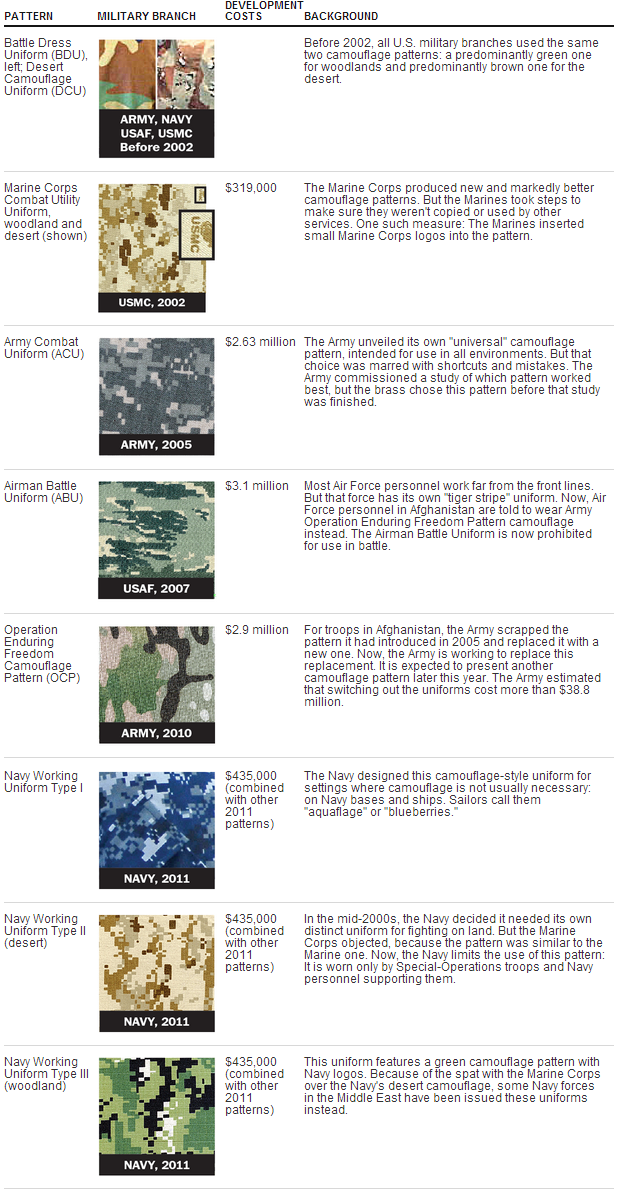 The Marine Corps, my employer since August, rightly prides itself on its “uniqueness.” But Marines managed to hold on to their distinct ethos during the two decades they wore the same cammies as not only their sister services but most of our NATO allies as well. It’ll survive going  back to a common look.

Indeed, given that MARPAT was the first US variant on the computer-pixilated camouflage pattern (our Canadian brethren were a few months ahead) and that none of the other services have any affection at all for theirs, the obvious way to make both Amos and Battaglia happy is to put everybody in MARPATs.

While we’re at it, I’d propose the radical suggestion that, in addition to adopting a common camouflage pattern for tactical operations, the services should also go back to a cheaper, non-camouflaged, utility uniform for fatigue and garrison duty. We went from dirt cheap, wash-and-wear olive drab fatigues to massively expensive camouflage unies for daily wear. Our troops don’t need to be camouflaged at the motor pool or sitting behind a desk at Fort Polk.