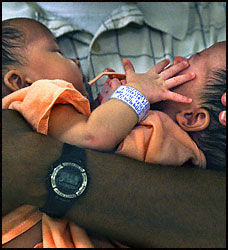 Surgeons successfully separated twins conjoined at the chest and abdomen this afternoon at Children’s Hospital in the District. Cheers and applause broke out in the operating room at about 12:30 p.m. as lead surgeon Gary Hartman snipped the last centimeter of tissue connecting four-month-old Jade and Erin Buckles.

Smiling broadly, the hospital’s chief of surgery, Kurt Newman, walked into the day room where the twins’ parents, Marine Gunnery Sgt. Kevin Buckles and his wife, Melissa, were waiting anxiously. “You’ve now got two babies that are separate and they are both doing well,” Newman announced.

The actual separation was completed in just two and a half hours. Jade was then rushed to an adjoining operating room. Various repairs and closure of the massive surgical wound on each girl took an additional three-plus hours. Both babies were recovering in the intensive care unit by late afternoon. They were listed in critical condition. The separation moved surprisingly fast and without complications, as doctors split the girls’ shared liver — the only human organ that regenerates — and dealt with what they expected to be the surgery’s biggest challenge: Erin’s heart, which lies horizontally, with 60 percent of the muscle jutting into Jade’s chest.