Before we raise taxes on the rich, let's first stop the flood of tax money that's subsidizing their lifestyle. 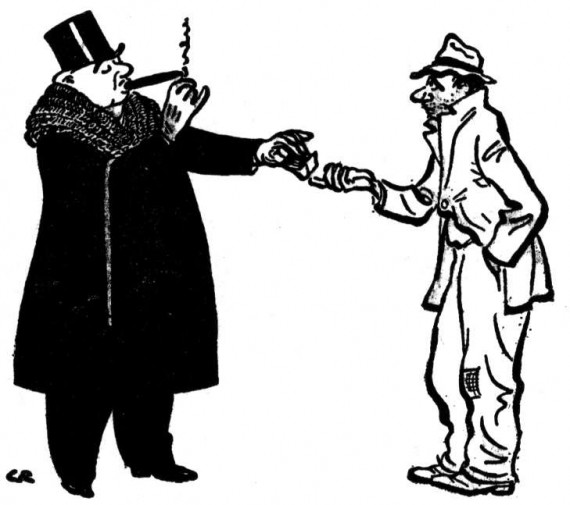 Ross Douthat has an interesting take on recent reports about fat cats getting fatter while most are falling further behind during this recession.  In a column titled “The Class War We Need,” he observes,

The left-wing instinct, when faced with high-rolling irresponsibility, is usually to call for tax increases on the rich. But the problem, here and elsewhere, isn’t exactly that we tax high rollers’ incomes too lightly. It’s that we subsidize their irresponsibility too heavily — underwriting their bad bets and bailing out their follies. The class warfare we need is a conservative class warfare, which would force the million-dollar defaulters to pay their own way from here on out.

He notes that the federal government provides all manner of subsidies for the well off:

Intended to boost middle-class homebuyers, [the mortgage-interest tax] deduction has gradually turned into a huge tax break for the affluent, with most of the benefits flowing to homeowners with cash income over $100,000. In much of the country, it’s a McMansion subsidy, whose costs to the federal Treasury are covered by the tax dollars of Americans who either rent or own more modest homes.

This policy is typical of the way the federal government does business. In case after case, Washington’s web of subsidies and tax breaks effectively takes money from the middle class and hands it out to speculators and have-mores. We subsidize drug companies, oil companies, agribusinesses disguised as “family farms” and “clean energy” firms that aren’t energy-efficient at all. We give tax breaks to immensely profitable corporations that don’t need the money and boondoggles that wouldn’t exist without government favoritism.

And we do more of it every day. Take Barack Obama’s initiative to double U.S. exports in the next five years. As The Washington Examiner’s Tim Carney points out, it involves the purest sort of corporate welfare: We’re lending money to foreign governments or companies so that they’ll buy from Boeing and Pfizer and Archer Daniels Midland. That’s good news for those companies’ stockholders and C.E.O.’s. But the money to pay for it ultimately comes out of middle-class pocketbooks.

This isn’t just a corporate welfare problem. The same pattern is at work in our entitlement system, which is lurching toward bankruptcy in part because of how much Medicare and Social Security pay to seniors who could get along without assistance. Instead of a safety net that protects the elderly from poverty, we have a system in which the American taxpayer is effectively underwriting cruises and tee times.

He’s right, of course.  None of these policies make sense when looked at in terms of societal cost-benefit analysis.

Of course, that’s not how these things get into the tax code.  They’re either sops to lobbyists who simply care more about the issue than those who pay for the subsidies or, in many cases, an unintended consequence of buying the votes of the middle class with tax dollars only to see the benefits going to those who don’t need them.