Cornel West is a bright and accomplished man. He has his PhD from Princeton and has inspired bidding wars between prestigious universities for his services. But, man, he's out there. 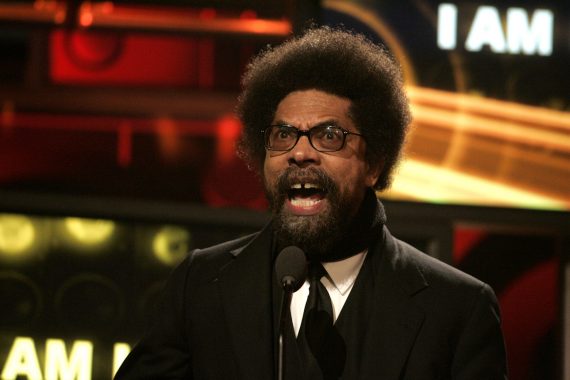 Cornel West is a bright and accomplished man. He has his PhD from Princeton and has inspired bidding wars between prestigious universities for his services. But, man, he’s out there.

What’s with the black suit, white shirt, black tie outfit you always wear? Do you have anything else in your closet?
I’ve got four black suits that I circulate, and they are my cemetery clothes — my uniform that keeps me ready for battle.

Your cemetery clothes?
It’s ready to die, brother. If I drop dead, I am coffin-ready. I got my tie, my white shirt, everything. Just fix my Afro nice in the coffin.

So let me ask you: in 2007, you introduced Barack Obama as your “brother, companion and comrade.” But in May, you referred to him as “the black mascot of Wall Street oligarchs” and the “head of the American killing machine.” What in the world happened?
It was a cry from the heart. What happened was that greed at the top has squeezed so much of the juices of the body politic. Poor people and working people have not been a fundamental focus of the Obama administration. That for me is not just a disappointment but a kind of betrayal.

But you have also acknowledged that this is more than just political — you’ve said that after campaigning for him at 65 events, you were miffed that he didn’t return your phone calls or say thank you.
I think he had to keep me at a distance. There’s no doubt that he didn’t want to be identified with a black leftist. But we’re talking about one phone call, man. That’s all. One private phone call.

He was running a successful candidacy for president. He might have been busy.
So many of the pundits assume that it’s just egoism: “Who does Cornel West think he is? The president is busy.” But there’s such a thing as decency in human relations.

O.K., but did you also have to say that Obama “feels most comfortable with upper-middle-class white and Jewish men who consider themselves very smart”?
It’s in no way an attempt to devalue white or Jewish brothers. It’s an objective fact. In his administration, he’s got a significant number of very smart white brothers and very smart Jewish brothers. You think that’s unimportant?

When Larry Summers was president of Harvard, he told you your rap album was an “embarrassment” to the university, and you quit soon after. He was one of Obama’s first appointments. Did that strike a particular feeling in your heart?
I couldn’t help it. I’m a human being, indeed. Given the disrespect he showed me? Oh, my God. Again, it’s political much more than it’s personal. Summers was in captivity to Wall Street interests. But it’s personal too.

You have 30 seconds of private time with the president — what do you say to him?
I would say: “Look at that bust of Martin Luther King Jr. in the Oval Office and recognize that tears are flowing when you let Geithner and others shape your economic policy, when you refuse to focus on poor and working people or when you drop the drone bombs that kill innocent civilians. Tim Geithner does not represent the legacy of Martin King.”

Larry Summers must feel more vindicated by the day. And, surely, it’s no wonder that Barack Obama feels more comfortable around sane Jewish brothers than this cat.

He’s got a good point, though, about the Treasury Secretary bombing civilians and making Dr. King cry. That’s just not right.