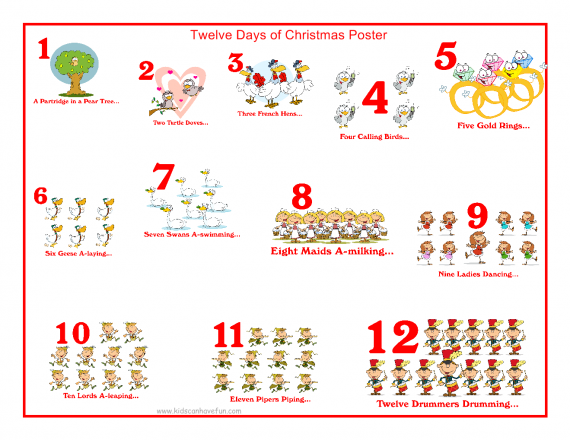 It’s getting more expensive to pay for all the items in the 12 Days Of Christmas:

A fanciful splurge over the holidays will cost more than ever this year, at least for those who take their gift cues from the popular holiday classic “The Twelve Days of Christmas.”

An improving economy has driven the cost for one round of the dozen days of whimsical gifts to $27,393 this year, up $1,962, or 7.7 percent, over last year, according to an annual snapshot of how the costs of goods and services affect the economy. The price reflects the largest increase for the eccentric shopping list since 2010, when the index rose 9.2 percent.

Those who might have a lake or large pond can breathe easy this year, according to the tally by PNC Wealth Management, part of the PNC Financial Services Group, because the cost for seven swans a-swimming remains $7,000 — the same as three decades ago.

That is when PNC started the goods and services index to show how much the parade of unforgettable presents — from a partridge in a pear tree to 12 drummers drumming — would cost a “true love” to give. Unlike the Consumer Price Index, which tracks workaday items like food, gasoline and electricity, PNC focuses on the quirky, the squawky and the musical.

This year, the PNC Christmas price index diverges widely from its federal counterpart, which is up only 1.2 percent for the 12 months through November.

“It’s a surge compared to the government index,” said James P. Dunigan, PNC Wealth Management’s managing executive of investments, who oversees the compilation of the index.

“The goods were similar prices, but services like the dancers were up this year, as they began to catch up from smaller increases in recent years.”

But over all, he said, “The figures over the past 30 years for the indexes show each averaged a 2.9 percent increase on an annual basis.”

This year, the cost of engaging the lords and ladies jumped the most. The nine dancing ladies soared 20 percent, to $7,553. Next were the 10 lords a-leaping, whose cost rose 10 percent, to $5,243. The 11 pipers piping and the 12 drummers drumming edged up slightly, just 2.9 percent this year, with the pipers at $2,635 and the drummers at $2,854. The prices come from the Philadelphia Dance Company and the Pennsylvania Ballet.

In contrast, the price for most of the fowl held steady over last year, unlike 2012, when the cost of feathered creatures rose markedly after a widespread drought drove up feed costs. Over the long term, however, the hens soared 983.4 percent — to $165 for three of the French Houdon breed — up from $15.83 in 1984.

There are still a few holiday bargains to be had, like the 3.2 percent decline in the cost of the partridge’s perch, a pear tree, which costs $184 this year, according to prices provided by Cinnaminson Nurseries in New Jersey.

The services of the eight milking maids, the only unskilled labor on the gift list, remained at $58 at the federal minimum wage of $7.25 an hour, though Mr. Dunigan noted that could soon change as pressure mounts to increase the minimum wage.

The price of the five gold rings was also flat, at $750. Mr. Dunigan said that the price of gold was down 25 percent over a year ago and that the drop was likely to be reflected in lower prices in coming months.

The partridge is the cheapest item, at $15, and the swans, at $1,000 each, are the most expensive. The availability and price of swans fluctuates greatly, so much so that the PNC list annually reports a so-called core index without the swans.

And that doesn’t even include the delivery costs!