Matt Lewis notes that “the Conservative Political Action Conference is coming up this week” (tomorrow, in fact) and declares “As always, it will be interesting to see who wins this year’s coveted CPAC Straw Poll.”  Apparently, Taegan Goddard agrees in that he’s holding a straw poll on the straw poll.

I’m not sure why.   The straw poll voters couldn’t be less representative; it’s mostly a bunch of enthusiastic college kids and old farts who come year after year.

Indeed, Mitt Romney has won three years in a row.   The 2008 poll was taken the day after Romney dropped out of the race and Romney still won!  McCain finished a close second but he was the inevitable nominee by that point.   John McCain finished a distant fourth in the 2007 poll, garnering less support than Sam Brownback.  So, let’s just say it doesn’t have much predictive value.

This year’s ballot features Haley Barbour, Mitch Daniels, Newt Gingrich, Mike Huckabee, Sarah Palin, Ron Paul, Tim Pawlenty, Mike Pence, Mitt Romney, Rick Santorum and John Thune are on the ballot, along with Other (write-in) and Undecided.   Let me go out on a limb and say Romney will win again.  This time, it might actually reflect the 2012 outcome. 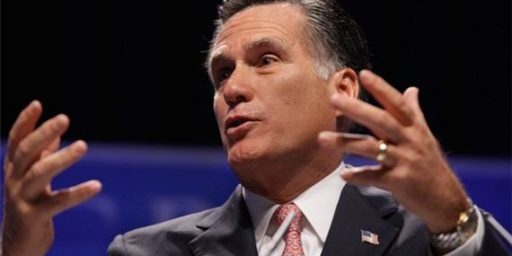