News 8 talked to James who confirmed he is interested in getting involved in Republican Party politics, and he’s not ruling out a run for office.

James said in addition to his role as a college football analyst, he’s also been in business as a real estate broker and investor. He calls himself a conservative and very concerned about government intervention in business and health care.

James has been making the rounds meeting prominent Texas Republicans and donors raising his political profile, and he said he would not rule out running for the Hutchison seat. “I’m a Texan. I’m concerned for our country,” he said. “I disagree with the approach that we’re having, things that are taking place, and so whatever door opens up, I’ll look at it, if and when it opens up.”

James realizes his role in the controversy involving his son that led to the firing of Texas Tech Football Coach Mike Leach could affect him politically.
“Any mom or dad who knew what we knew at the time that we knew it would’ve taken the same action that we did,” he said. “Whatever the consequences are, we didn’t care about that. We cared about doing what was right and protecting and taking care of our son.”

His central message as a candidate for any office would be, “Why does the government have to be involved in everything we do?”

I’m guessing he’ll not get a lot of votes from Texas Tech fans, even though he was right to turn in Leach for his transgressions.  Josh Kraushaar says “he’d have a tough time winning many votes in west Texas right now. It wouldn’t be much of a stretch to call James one of the most loathed people in Lubbock.” See the comment thread on The Hill‘s coverage for a taste.  We’ve seen three prominent college coaches fired in short order for abusing the student athletes under their charge, so James was on the cutting edge of a revolution.

He was a legendary high school and college player in Texas, starring with Eric Dickerson as part of SMU’s Pony Express backfield before that team suffered the NCAA “death penalty” from which it is only now recovering.   After a brief stint in the defunct USFL, he played with the NFL’s New England Patriots and won an offensive player of the year award and Pro Bowl honors his first season.  He was the last Caucasian running back to rush for 1000 yards in a season, earning him the nickname “The Great White Hope.”  Injuries derailed his career shortly thereafter and he turned to broadcasting.

My reflex is to be skeptical when celebrities jump into politics at a high level, on the grounds that they don’t have policy experience.  But, given the depths to which the Senate has sunk, it’s hard to argue that more career politicians is what we need.  Alas, with his talk about a second American revolution, he’s not exactly my cup of tea. 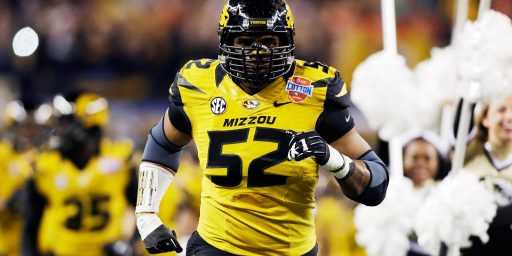