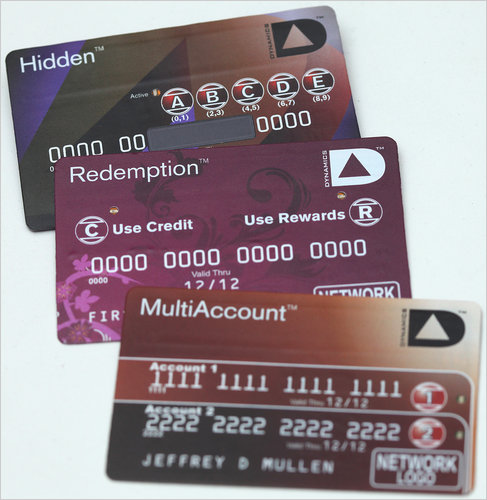 Interesting news from NYT:  “Credit Cards Soon to Get a Makeover”

Next month, Citibank will begin testing a card that has two buttons and tiny lights that allow users to choose at the register whether they want to pay with rewards points or credit, at most any merchant they please.

Other card issuers are testing more newfangled cards, including some that can double as credit and debit cards, and cards with fraud protections baked right into the plastic. One, for instance, shows a portion of the account number only after the cardholder enters a PIN.

The microscopic engine powering the plastic will help breathe new life into a 1950s-era technology — the black magnetic stripe found on the back of the 1.8 billion credit and debit cards circulating in the United States. Much of the world has already moved to using more advanced cards, like the ones in Europe that require a PIN and use a chip instead of a magnetic strip.

Even with the innovations, no one knows how long plastic cards will reign. They may eventually be rendered obsolete by technologies that will transform consumers’ cellphones into virtual wallets, and a large number of companies, including Visa, MasterCard and Apple, are developing these. But several card analysts say it will probably take a while before any one technology standard becomes available across all phones and merchants.

Indeed, one would think cash would have been rendered obsolete long ago but we still have it.  Hell, we can’t even manage to get rid of the penny, which has been useless for decades.

It is amusing, however, how far behind the United States is in adopting new technologies.  This, despite our self-image as the planet’s most advanced society.   We’re years behind the Europeans on such things as cellular, broadband, credit cards, counterfeit-proof currencies, and a myriad of daily use technologies.    Presumably, this is largely a function of their greater population density and ability to dictate a single technological “winner.”