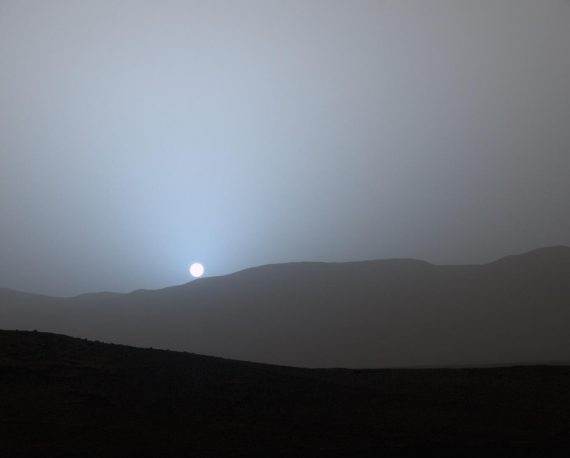 NASA’s Mars Curiosity Rover has captured the best photos yet of the stunning blue sunsets of Mars:

More than three years after Curiosity first began its mission on Mars, the NASA rover finally had some time to observe — and photograph — its first sunset.

And yes, a sunset on the Red Planet is blue. Why? In simple terms, it comes down to dust.

“The colors come from the fact that the very fine dust is the right size so that blue light penetrates the atmosphere slightly more efficiently,” Curiosity team member Mark Lemmon of Texas A&M University said in a statement. ”When the blue light scatters off the dust, it stays closer to the direction of the sun than light of other colors does. The rest of the sky is yellow to orange, as yellow and red light scatter all over the sky instead of being absorbed or staying close to the sun.”

The intensity of the sunset’s blueness is explained by the same principles at work to make a vivid Earth sunset, just with different colors. Light from a setting sun has to pass through the atmosphere on a longer path than it does at mid-day, NASA explains.

The blue color seen in the photographs is close, but not identical, to what a human on Mars would see while taking some time out of a busy day working on Mars to watch the sun set. If anything, NASA says, the MastCam’s lens is “actually a little less sensitive to blue than people are.”

The photographs were sent home on April 15, from the rover’s position in the Gale Crater. The images returned to Earth from Curiosity’s MastCam are in black and white but contain coded information that, when decoded, reveals color. Some, like Damia Bouic, were able to decode the colors contained within the image on their own. NASA released its own color image sequence on Friday.

More photographs, and an animation, at the rover’s website. And, I thought this Tweet from Curiosity was kind of nice too:

Let us go then, you and I When the evening is spread out against the sky Blue sunset on Mars http://t.co/eMwViPNsGp pic.twitter.com/7CkIqrVXan

This isn’t the first time we’ve gotten a view of Martian sunsets, but the cameras are much more sophisticated this time.