The current Republican primary polls are "measuring a unicorn electorate" yet effect the outcome of the race.

University of San Francisco political scientist Ken Goldstein argues that the current Republican primary polls are “measuring a unicorn electorate.” The main critique that we level is that voters are simply paying too little attention at this point and know too little about the candidates, making the results almost entirely about name recognition. That’s all true. But Goldstein contends that we’re not even looking at the likely primary voters.

The first problem with trying to measure the attitudes of a target population of the national Republican primary electorate is that such an electorate does not actually exist in the quite the same way that other electorates do. The presidential nominating process is a dynamic one, with primaries and caucuses that could theoretically play out over a five-month period. The size and shape of the electorate in each state will be determined by whether the race is still competitive when it reaches a particular state and by the number of candidates still running. Put another way, probably only Republican caucus goers in Iowa and, perhaps, primary voters in New Hampshire, will have the chance to choose between the current crop of candidates. And that’s making the outlandish assumption that none of the candidates drop out in the next few months.

With 17 candidates in the race, it’s probable that the race will continue to be meaningful longer than in most recent contests. But, yes, some significant number of the candidates will likely be out of the race before Iowa, much less New Hampshire and their “supporters” will have a different set of choices available to them by the time they can actually vote than they have now.

What percentage of registered votes or how many people do these surveys assume will take part in the GOP nominating process? Let’s look at the recent Fox News poll. The survey sampled 1,019 registered voters and was conducted by a Republican firm, Shaw and Company, and a Democratic one, Anderson Robinson Research, using high-quality methods such as live interviewers and a standard dual frame design including both landline and cell phones. The results on a variety of questions such as whether voters approve of President Obama’s job performance are perfectly in line with all the other public polls that have recently been released.

To its credit, the survey also asked questions to gauge how likely respondents were to take part in a presidential primary or caucus and in which party’s contest they were likely to participate. This screening question yielded 389 registered voters (or 38 percent of registered voters in the country) who said they were likely to vote or caucus in the battle for the Republican nomination. Among this group, the survey found Donald Trump ahead of the field by 3 percentage points over Scott Walker. More importantly, in the contest to be invited to the debate in Cleveland, John Kasich and Rick Santorum tied for 10th with each capturing 2 percent, besting Carly Fiorina and Rick Perry, both of whom polled at 1 percent, and just behind Chris Christie with 3 percent.

That may be too small a sample size to begin with. And the fact that voters don’t have a strong opinion on Kasich and Fiorina right now doesn’t mean they couldn’t rise in the polls. But the main problem is simply that most of those candidates are in one undifferentiated cluster at this stage.

So, while it’s hard not to observe that a grand total of six poll respondents—that’s six actual human beings—separate the ninth-place candidate from the 13th, let’s look at the survey’s assumptions about the size of the Republican electorate.

From the Census Bureau’s Voter Supplement to the Current Population Study, we know that there are 150 million registered voters in the country. So, the 1,019 respondents to the Fox survey correspond to the opinions of 150 million Americans. Accordingly, 38 percent of registered voters (those who were asked their GOP nominee preference) means that these 389 respondents represent the preference of just over 57.2 million voters. Is that a plausible estimate of the number of people who will take part in the 2016 Republican nominating contest?

Well, actually, no. In 2012, 19 million Republicans took part in the nominating contest. In a more competitive race with a wider GOP field in 2008, 21 million took part in the nominating contest. On the other side in 2008, for some additional context, in the highest number of voters ever to take part in a nominating contest, just over 37 million took part in Democratic primaries and caucuses. (By the way, want to start a fight in Hillary Clinton’s Brooklyn HQ, ask old Obama and Clinton staffers who won the most votes and what should have been done with Michigan and Florida vote totals.) And, in the 2012 general election, Mitt Romney received 61 million votes. Put another way, the Fox News-survey, and most other surveys of Republican primary preferences are using samples that represent target populations that are nearly equal to the total number of votes that Mitt Romney received in the general election in 2012, about three times as large as recent primary electorates and almost twice as large as the record-shattering Democratic primary electorate in 2008. While there are lots of candidates and some enthusiasm on the GOP side, it is not likely to approach 60 million, as the Fox and other recent polls assume.

None of that would much matter if all we were trying to do is predict the eventual nominee. At this point, that’s a mere parlor game with no real consequences. But, as Goldstein points out, it will have real world consequences this year because they’re going to be the basis of deciding who is allowed on the debate stage. While I can’t conjure a scenario wherein Carly Fiorina wins the nomination, it’s not inconceivable that a John Kasich emerges as the representative of the “Chamber of Commerce” wing of the party if Jeb Bush were to falter.  Yet that can’t happen if he’s left off the debate stage and thus rendered a non-candidate. 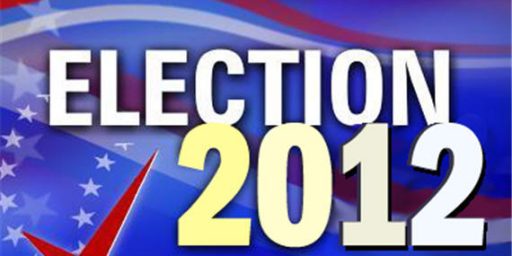