President Obama's selection of Bill Daley as Chief of Staff is being seen as a sign that the White House is moving to the center and gearing up for 2012. 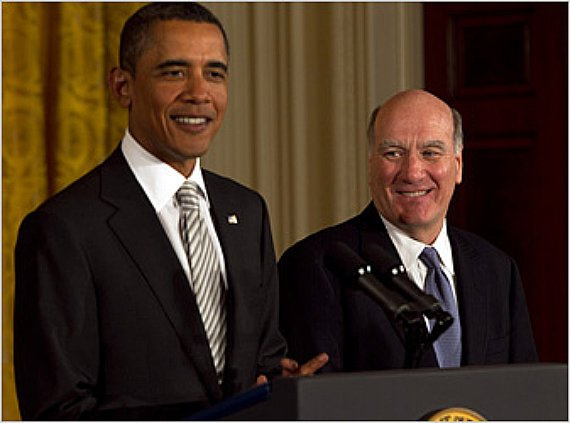 Today, President Obama made official what had become speculation for the past few days when he name former Commerce Secretary Bill Daley as the new White House Chief Of Staff:

President Obama tapped former Commerce secretary William Daley as his permanent chief of staff on Thursday, bringing in a seasoned political operative with Wall Street bonafides to manage his administration heading into the re-election campaign.

Daley, 62, will assume one of the most influential positions in government. He replaces Pete Rouse, who served in the job on an interim basis and will remain in a new role as counselor to the president.

Despite hailing from a famed Chicago political family and having ties that extend across the Democratic establishment, Daley is not a part of Obama’s inner circle. The two met several times in recent months as Obama gauged his comfort level and weighed the value of bringing in an outsider to run his tight-knit group of advisers, officials said.

Daley – who served in the Clinton administration and ran former Vice President Al Gore’s presidential race – came highly recommended by trusted White House figures. He traveled extensively with Vice President Biden during the 1988 presidential campaign, has a long-standing friendship with senior adviser David Axelrod and is extremely close to the previous chief of staff, Rahm Emanuel – who is currently running to succeed Daley’s older brother Richard as mayor of Chicago.

Obama’s announcement in the East Room Thursday afternoon, sets in motion a major overhaul of his West Wing staff, one that will continue on Friday with the expected selection of Gene Sperling as head of the National Economic Council.

In tapping Daley, Obama may achieve multiple goals. A lawyer who now serves as Midwest chairman of J.P. Morgan Chase, Daley could help restore the administration’s frayed relationship with Wall Street and the business community and speak credibly on the economy, Obama’s declared focus over the next two years.

A veteran of past partisan battles, Daley will also be tasked with managing the new Republican Congress. And he will introduce an outsider’s perspective, potentially bringing in other new advisors to a White House that has been criticized as too insular.

“He is someone who has a broad range of public and private sector experience, has been in and out of government and can be a strong public advocate on behalf of the White House,” a senior administration official said, speaking on condition of anonymity because Obama had not yet made the announcement. “The most important thing was that he was the right person to run the White House.”

MSNBC’s First Read speculates that this is the beginning of the White House preparing for 2012:

One other reminder about the signal the Daley hiring would send: Daley and Plouffe are not being brought in to manage Washington and a legislative agenda (a la Rahm, Rouse, Messina, Schiliro). Daley and Plouffe and the new team are coming in to retool the West Wing to become more responsive to OUTSIDE Washington needs; more responsive to governors and mayors — you know, the folks that matter a heckuva lot more in an election year.

In addition, as The New York Times points out, Daley brings ties to the business community that have been severely lacking the Obama White House:

WASHINGTON — He is a top executive at JPMorgan Chase, where he is paid as much as $5 million a year and supervises the Washington lobbying efforts for the nation’s second largest bank. William M. Daley also serves on the board of directors at Boeing, the giant defense contractor, and Abbott Laboratories, the global drug company, which has billions of dollars at stake in the overhaul of the health care system.

And now, Mr. Daley, a longtime Illinois political operative, will hold one of the most powerful jobs in Washington: chief of staff in the White House, where he will help decide who gets access to the Oval Office and what President Obama’s Capitol Hill agenda should be.

The recruitment of Mr. Daley to Pennsylvania Avenue from the corporate board room is seen as a savvy step by some in Washington, who argue that Mr. Obama has long needed a White House confidant who has the ear of the business community and a record of bipartisanship that might help the president negotiate with Republicans on Capitol Hill.

“This is a strong appointment,” said Thomas J. Donohue, the president of the United States Chamber of Commerce, which has been a harsh critic of the Obama administration and provided financial support that helped Republicans take control of the House. “Bill Daley is a man of stature and extraordinary experience in government, business, trade negotiations, and global affairs.”

In other words, a move to the center and an effort at rapprochement with the business community, which seems to be exactly what guys like Greg Sargent at Plum Line are afraid of:

Republicans and conservatives have uniformly condemned the Obama administration as in the grip of unrepentant leftism run amok. Yet what’s actually happened is that in so doing, Republicans have moved to the right, and we’ve all agreed to move what we arbitrarily call the “center” to the right in order to accomodate this.

The pick of Daley, however, will reinforce the conventional narrative that Obama has recognized the error of his ultraliberal ways and has picked a “seasoned Beltway hand” to steer the adminstration back to the center. Obviously this is only one of many things to consider about the Daley pick, and there may be many other good reasons to pick him that outweigh this problem.

As Chris Cillizza points out, though, it’s quite apparent that the White House doesn’t care much what the progressive left thinks:

The selection of Daley is further evidence that the White House is paying little attention to the carping on the left. Daley is widely regarded as a business-friendly, pragmatist; he told the New York Times last year that the Administration had “miscalculated” on health care because the country was, at its roots, “center left” not “left”.

As expected, liberals howled when the Daley pick was made public, casting him as a corporatist out of step with the broader Administration on any number of issues. (Republicans, of course, gleefully forwarded around those clips to reporters.)

Without a serious figure on the ideological left weighing the idea of a primary challenge to Obama in 2012 — former Sen. Russ Feingold (Wisc.) and former Gov. Howard Dean (Vt.) are both out of the running — the White House almost certainly believes that there is little danger in making a move like this one.

Exactly. Obama’s concern at this point is focused on dealing with the new dynamic on Capitol Hill and setting up the re-election campaign. The left wing of the Democratic Party will harp, and they will complain, but, as the ending weeks of the lame duck session proved quite emphatically, in the end they will come back into the fold. Mostly because they’ve got nowhere else to go and no credible standard bearer other than Barack Obama. I’m not sure whether the Daley appointment will actually accomplish what the White House hopes it will but, at the moment, it seems like a smart move and that’s really all that matters at the moment.