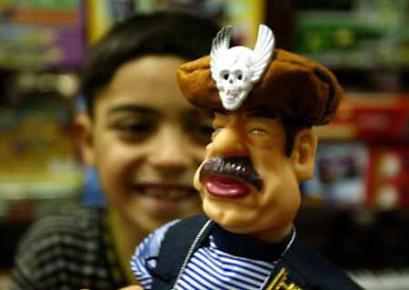 Iraqis used to dance to his tune, but in Baghdad toy shops a chubby, gun-toting Saddam Hussein doll now wiggles his hips to the “Hippy Hippy Shake.” Toy stores around Baghdad are doing a quick trade in dancing Saddam dolls — foot-high battery-powered puppets of the former president, kitted out in full insurgent regalia, who swing their hips to cheesy pop music at the flick of a switch. Decked out with hand-grenades, daggers, a walkie-talkie, binoculars and an AK-47, Saddam dances to the “Hippy Hippy Shake” when turned on.

“It’s funny, isn’t it?” said Mustapha al-Kadamy, a young father as he browsed through a toy store in the wealthy Mansoor district and prepared to buy one of the dancing Saddams. “Tomorrow Saddam will go before an Iraqi judge and so today is a good day to make fun of him — we need to be able to smile after all the horrible things he’s done to us.”

The owner of the store started offering the dolls shortly after Saddam’s regime was overthrown in April last year. A Turkish traveling salesmen turned up with the Chinese-made puppets, also featuring dancing Osama bin Ladens, Fidel Castros and George W. Bushes, and he placed an order.

At first it was the hip-shaking Osamas that sold best, but slowly Iraqis grew less fearful of ridiculing their deposed president and started buying the Saddam ones too. “At the beginning we’d hide them under the counter and only sell them to those who specially asked because people were upset to see the former president as a doll,” explained Asaad Majid, a salesman in the al-Jelawi toy store in Mansoor. “Now we’re not scared anymore, we display them openly, and people buy them regularly,” he said, adding that demand peaked soon after Saddam was captured last December.

Could there be a surer sign that the Iraqis are free? Not only do they get to ridicule their former tormenter but, perhaps more tellingly, they apparently feel free to mock the leader of their erstwhile occupier. That says something about how the U.S. presence is viewed, no?