David Cameron got home from a Sunday lunch with family and friends — and discovered he had left his eight-year-old daughter in the pub.

He dashed back and found little Nancy with staff at the Plough Inn in Cadsden, Bucks.

No 10 said: “The PM and wife Samantha were distraught when they realised Nancy wasn’t with them.”

Nancy got left in the pub loo when Mr Cameron drove off after his lunch.

She wandered off to the Ladies as the PM and Samantha were arranging lifts — and they only realised she was missing once they were back home.

Downing Street said: “The PM and Samantha were distraught when they realised Nancy wasn’t with them.

“Thankfully when they phoned the pub, she was there safe and well.

“The PM went down straight away to get her.”

Well, that’s mortifying. Thankfully, Samantha’s fine and this will just be an amusing if embarrassing anecdote as time goes on.

While I suppose any parent could have this lapse, it’s especially understandable in Cameron’s case. After all, he’s used to have his people take care of every detail so that he can focus on relationship building. Additionally, he and the family were traveling in different cars:

The Camerons and children Nancy, Arthur, six, and 22-month-old Florence had been having Sunday lunch with two other families at the Plough Inn near the PM’s country home Chequers. Afterwards the PM went home in a car flanked by bodyguards, thinking Nancy was with Sam and their other children in a second vehicle.

It’s worth noting that the entire separation–from the time she was left until the Camerons retrieved their daughter–was a mere 15 minutes. 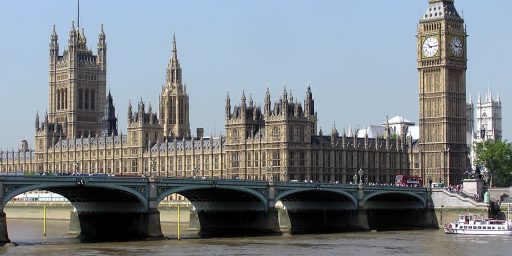