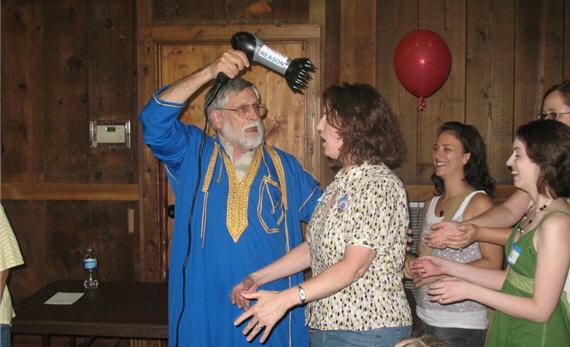 American atheists lined up to be “de-baptized” in a ritual using a hair dryer, according to a report Friday on U.S. late-night news program “Nightline.”

Leading atheist Edwin Kagin blasted his fellow non-believers with the hair dryer to symbolically dry up the holy water sprinkled on their heads in days past. The styling tool was emblazoned with a label reading “Reason and Truth.”

Kagin believes parents are wrong to baptize their children before they are able to make their own choices, even slamming some religious education as “child abuse.” He said the blast of hot air was a way for adults to undo what their parents had done.

Donald Sensing, a retired Army officer and current Methodist minister, rightly points to the nonsensical nature of this ritual.

There are only two choices here:

2. Baptism does have some reality to it, so by going through motions with this hair dryer, that reality is presumed removed from the life of the de-baptized.

So which of these two, mutually-exclusive conclusions does someone standing before the dryer affirm? If baptism is not real, it can have no hold on you. But if baptism is real, at least in some way, then it cannot be revoked by human word or deed, since baptism is the work of the Holy Spirit with the priest or pastor as effective, but not original, agent. In most Christian theology of baptism, someone can no more be de-baptized than a Jewish man can be de-circumcised.

I suppose there’s a third choice:

3. Baptism means nothing to these people, but they think this is amusing and/or irritating to Christians.

Given the in-your-face attitude of segments of American atheism, I’m betting on that rather than sheer stupidity.

Also, as I discovered when looking for photos for the post, this practice has been around at least two years.  But if Don and I hadn’t heard of it before now, maybe you haven’t either.

Sarah Palin: Waterboarding Is How We Baptize Terrorists