Debunking A Myth: Reagan Was Leading Carter Long Before That Final October Debate 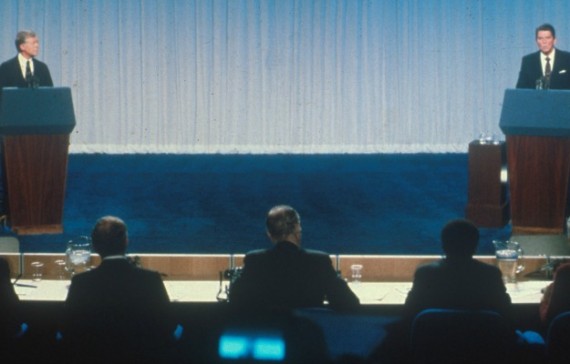 One of the most common statements I’m hearing from Romney supporters these days when bad poll numbers come out involves some variation on the “polls don’t matter” refrain that you often here from supporters of candidates who are falling behind in the polls. In this particular case, they attempt to back up their argument with the “fact” that Ronald Reagan was trailing Jimmy Carter by as much as seven points in the polls until the candidates met in their one and only debate on October 28, 1980 in Cleveland, Ohio. This is the debate where Reagan asked his famous “Are you better off?” question during his closing remarks. Somehow, it became conventional wisdom that, until that debate, Reagan was trailing Carter and that it was only this debate that turned things around and, one week later, propelled him to victory.

As it turns out, that is completely untrue:

Below is a graph of all the polls, plus a smoothed trendline.  The public polls were graciously provided by Robert Erikson and Christopher Wlezien, who use similar data from every election from 1952-2008 in their forthcoming book, The Timeline of Presidential Elections—which everyone should buy.  I’ve supplemented their data with some late private polls conducted by the two campaigns, which are available in this paper by Warren Mitofsky.

The plot shows what Chait describes, which is the ebbing of Carter’s poll standing throughout 1980.  Indeed, Reagan didn’t need his convention bump—which he certainly got—to put him in the lead.  The Democratic convention helped erode Reagan’s lead but it never closed it altogether.

At the end of the campaign, Reagan did surge, but this only increased his lead.  His surge appears to have been brought on first by the debate, and then perhaps by several other events in the final week of the campaign.  To quote Mitofsky:

During that same final week, Richard Allen resigned from the Reagan campaign for an alleged misuse of influence during his Nixon White House days. The same day Carter’s congressional liaison, Frank Moore, resigned after repeating the unsubstantiated story of the Ayatollah’s cancer. On Friday of that week the final economic indicator of the campaign showed inflation still seriously on the rise. And on Sunday morning, November i, the Iranian parliament announced their conditions for freeing the American hostages. Jimmy Carter immediately abandoned campaigning and appeared on national television in the early evening to repeat much of what the public had been hearing all day. It was a week, in effect, with much that could affect the choices made by voters.

Here’s the chart referred to above: 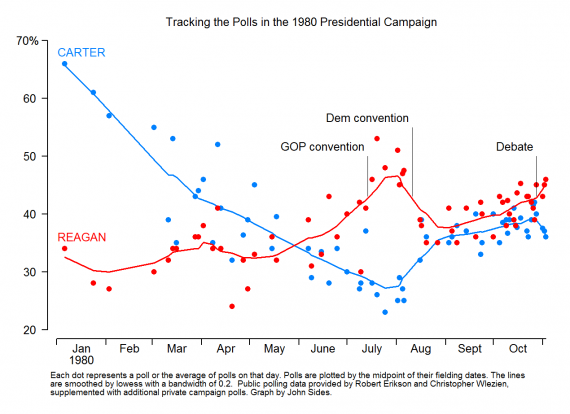 And here’s a chart of the RCP Poll of Polls through today, which includes a new New York Times/CBS News poll showing Obama leading by three: 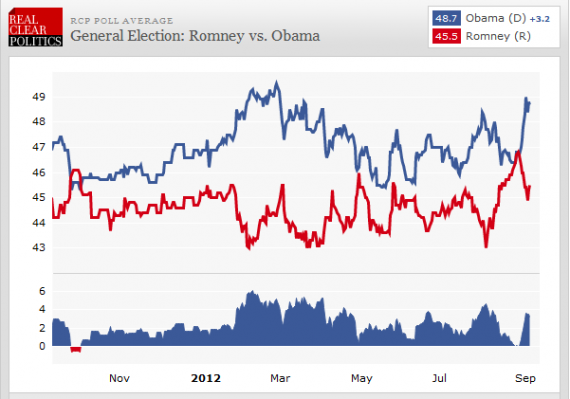 Andrew Sullivan sums it up:

Reagan was never behind Carter in the poll of polls from May of 1980 onwards. Equally, Obama has never been behind Romney in national polls from November of 2011 onwards. Yes, Reagan did have a last minute surge to give him a landslide, thanks to the debates, but he would have won without it. From September on, the 1980 race looks a little like the current gap between the two candidates, but with the roles reversed. Carter was a few points behind, like Romney, but never managed to overtake him when it mattered, and then suddenly lost in a landslide.

I must admit that I have at times repeated the “Reagan was behind before the last debate” meme a few times when discussing Reagan’s “Are you better off?” question without actually checking the data. That was my mistake, but I think it’s one that a lot of people make because, for some reason, the idea that Reagan won the election in that debate has become part of political legend. As Sullivan notes, what Reagan won in that debate was the landslide victory that he would score just a week later. Prior to the debate, he was leading in the polls, but a slightly smaller margin that would’ve still likely lead to a victory, but probably by a smaller margin in both the Popular Vote and the Electoral College.

There are other significant differences between 1980 and today. President Obama’s job approval numbers have hovered at or below the 50% mark for the better part of a year now, but they’ve never really gone below 45% or so for a significant period of time. Right now, the President’s job approval is at 49% according to the RCP polling average. By contrast, as Ed Kilgore points out, at this point in the 1980 election cycle, President Carter’s job approval was at 37% and had been below 40% for four straight months. In other words, Jimmy Carter was a far, far weaker incumbent than Barack Obama is. If you’re looking for an analogy to apply to this election, look to George W. Bush in 2004, who was at 52% job approval at this point in the 2004 cycle. Of course, Bush went on to defeat John Kerry, and, just like Obama, had been leading Kerry in the polls for months prior to Election Day:

I can understand why Romney supporters would want to cling to this myth in the face of bad poll numbers and an increasingly narrow path to victory for their candidate. This is what partisans tend to do when faced with bad news, and the legend of Ronald Reagan’s win in 1980 offers them a comforting counter-example to what the polling charts are showing them. The problem is that it’s a myth, and once you realize that, things become rather grim for Team Romney:

[W]ithout the 1980 model, there isn’tany example of a challenger coming from behind to defeat an incumbent president. The leader of mid-September polls has gone onto win the popular vote in every election since 1948, and then it was the incumbent who pulled off the comeback. Now, unprecedented obviously doesn’t mean impossible. Only ten post-war presidents have run for reelection and there aren’t many lessons to be gleaned from the predestined blowouts where an incumbent continuously holds a substantial lead through November, leaving us with only five interesting races involving incumbents: 1948, 1976, 1980, 1992, and 2004. And if you ask me, 1976 and 1948 aren’t entirely analogous, since Ford and Truman were running for the presidency for the first time.

Romney is in a much worse situation than Reagan. Unlike Carter, Obama has inched close to 49 percent of the vote in the RealClearPolitics average, which puts him in striking distance of reelection. Even if Romney could pull-off a Reagan-esque surge among undecided voters, it would just result in a dead heat. And unlike Reagan, Romney didn’t demonstrate that a majority of voters were prepared to dismiss the president by reaching or surpassing his own magic number after the RNC. Instead, 2012 looks more like 2004.

If Romney can’t take a lead over the next week or so, he will be forced to do something never successfully attempted: mount an unprecedented comeback against an incumbent president. As mentioned before, the absence of precedent doesn’t mean something is impossible, especially since the race is close. But it might speak to probability, and I hope a hypothetical Romney comeback will be properly appreciated as a first in the history of presidential politics. Maybe then we’d finally be able to move on from the myth of 1980.

Is it possible for Romney to mount this comeback? Yes. Is it probable? Given the available evidence, I’d have to say no.