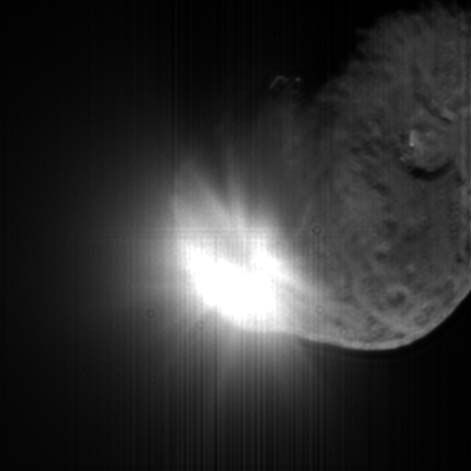 “What a way to kick off America’s Independence Day,” said Deep Impact Project Manager Rick Grammier of NASA’s Jet Propulsion Laboratory, Pasadena, Calif. “The challenges of this mission and teamwork that went into making it a success, should make all of us very proud.”

“This mission is truly a smashing success,” said Andy Dantzler, director of NASA’s Solar System Division. “Tomorrow and in the days ahead we will know a lot more about the origins of our solar system.”

Official word of the impact came 5 minutes after impact. At 1:57 a.m. EDT, an image from the spacecraft’s medium resolution camera downlinked to the computer screens of the mission’s science team showed the tell-tale signs of a high-speed impact.

“The image clearly shows a spectacular impact,” said Deep Impact principal investigator Dr. Michael A’Hearn of the University of Maryland, College Park. “With this much data we have a long night ahead of us, but that is what we were hoping for. There is so much here it is difficult to know where to begin.”

The goal of the Deep Impact mission is to provide a glimpse beneath the surface of a comet, where material from the solar system’s formation remains relatively unchanged. Mission scientists expect the project will answer basic questions about the formation of the solar system, by offering a better look at the nature and composition of the frozen celestial travelers known as comets.