I watched a few minutes of the game last night and had it on in the background for most of the evening, but missed this: 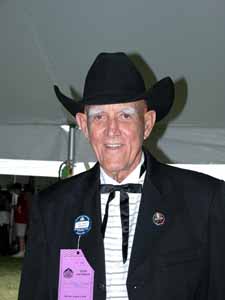 A 1943 All-American end and punter for the University of Southern California, Heywood enlisted in the Marine Corps in the same year to fight in World War II. He entered a program that allowed him to stay in school while learning the military basics. During World War II, the V-12 program was initiated to meet the increased need for Navy and Marine Corps officers. The program allowed officer candidates to attend civilian schools while in an enlisted status in the Navy or Marine Corps. But Heywood was shipped off to the war before he had a chance to graduate. Heywood, a decorated career officer, fought in three campaigns in the Pacific theater while aboard the USS Iowa. He was discharged from active duty in 1946.

When he returned from the war, Heywood talked to USC regarding completing his remaining requirements for graduation. He was eight units short of graduating, and the university awarded him 10 units in military science, based on his service. He was then drafted by the Chicago Rockets, an All-America Football Conference team, and then moved to the NFL’s Detroit Lions in 1947. The Boston Yanks picked him during the 1948 season before they became the New York Bulldogs in 1949. During his four-year pro football career, Heywood played both end and punter.

Heywood resumed his active-duty military career at the height of the Korean War in 1952. He also fought in the Vietnam War, taking command of the 26th Marine Regiment in the Republic of Vietnam. When he finally left the military for good after 32 years, he became the commandant of cadets at the Marine Military Academy in Texas.

Professional athletes and other entertainers routinely served during World War II and some even during Korea. It was an oddity indeed during Vietnam and almost unheard of since. As a companion piece notes, though, Pro Football Has Long, Distinguished Military History:

While World War II saw the most involvement of NFL personnel, every conflict since the NFL’s 1920 creation has seen at least one player contribute to the effort. According to the exhibit, 28 players fought in Korea, and one player, Chad Henning, traded shoulder pads for a flight suit in the Gulf War. [Henning is an Air Force Academy graduate and served prior to his NFL career with the Dallas Cowboys. -ed.]

To date, one NFL player left the field to join the efforts in the global war on terror. Pat Tillman of the Arizona Cardinals was killed in action in Afghanistan. The exhibit includes a tribute to Tillman, including an interview taped just before the NFL resumed games after the Sept. 11, 2001, terrorist attacks that centers on Tillman’s views of the events. Tillman joined the Army and became a Ranger at the end of the 2001 season.

Three servicemembers with pro football connections earned the Medal of Honor in World War II. Army Lt. Maurice Britt had been an end for the 1941 Detroit Lions before he shipped off for Italy. There, Britt — described as a “one-man army” — was seriously wounded in a firefight with German troops but continued to fight an enemy “superior in number.” He was the first World War II soldier to receive the Medal of Honor, the Distinguished Service Cross, the Silver Star and a decoration from the British government. The other two Medal of Honor recipients were Marine Capt. Joe Foss, who went on to become the American Football League commissioner from 1960 to 1966, and Marine Lt. Jack Lummus, who received his medal posthumously after being killed in action on Iwo Jima in the Volcano Islands. He played for the 1941 New York Giants.